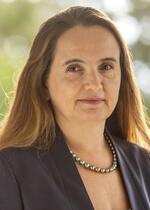 Dr Grethel Aguilar is the IUCN Deputy Director General – Regions and Outposted Offices. She brings to her leadership role 30 years of experience in achieving conservation and sustainable development in close collaboration with governments and civil society. She is particularly passionate about environmental law and the rights of indigenous peoples and local communities.

Throughout her career, she has helped communities access clean water, advocated for environmental justice, supported indigenous peoples in obtaining rights to their natural resources, and championed gender equality in environmental governance.

Dr Aguilar most recently held the position of IUCN Regional Director for Mexico, Central America and the Caribbean (ORMACC), and also led the ORMACC-South America Hub. In 2019, she was appointed IUCN Acting Director General – and steered the organisation in this role for more than a year.

Prior to joining IUCN, Dr Aguilar worked for the Costa Rican Environmental Law Centre, and later served in diverse capacities for bodies such as the Central American Commission for Environment and Development, the United Nations Environment Programme, as well as various governments and donors.

Dr Aguilar, a Costa Rican national, has authored multiple publications in the fields of environmental law and policy. As a firm believer in educating and inspiring the next generation, she taught at institutions such as the University of Costa Rica, The Tropical Agricultural Research and Higher Education Center (CATIE), the Latin American University of Science and Technology, as well as the Metropolitan Autonomous University of México.

Dr Aguilar has, at many stages of her career, been recognised for her contributions to environmental conservation. Most recently in 2020, she received the Premis Ones Mediterrani-Atlàntic award for her achievements in natural resource conservation, and her work in community rights, gender equality, and building alliances between governments and civil society. In 2019, the governments of Central America, via the Central American Commission for Environment and Development (CCAD), awarded Dr Aguilar for her many years of dedication to sustainable natural resource conservation and the wellbeing of people