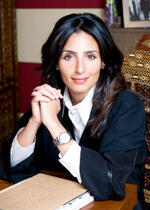 Razan Al Mubarak’s diverse experience leading a large government agency, an international philanthropic organization, and a conservation NGO focused on citizen engagement provides her with a unique perspective from which to lead the IUCN at this critical moment. As the head of the Environment Agency – Abu Dhabi (EAD), the Gulf region’s largest environmental regulator, Razan convinced the government to adopt targets to double the state’s protected areas and reduce greenhouse gas emissions by 42% by 2030. She also worked globally to reintroduce endangered species, such as the Scimitar-horned oryx, into the wild. Razan is the founding director of the Mohamed bin Zayed Species Conservation Fund, which under her leadership has supported more than 2,000 species conservation projects in over 160 countries. As a managing director at Emirates Nature, an NGO affiliated with the World Wildlife Fund, Razan has helped lead initiatives to protect the country’s wilderness, coral, and nesting and migrating sea turtles. As a member of Masdar's board of directors, Razan helped the company become one of the Middle East's largest developers of renewable energy. Since 2006, it has invested US$13.5 billion in mainly solar and wind projects in over 25 countries.

With an academic background in international relations and environmental studies, Razan brings extensive technical and executive expertise to the IUCN. With more than two decades of conservation experience in a region rife with competing interests, Razan is well-prepared to lead the IUCN into a new era focused on solutions that protect nature while ensuring sustainable development. Her global accomplishments at Environment Agency – Abu Dhabi (EAD) include overseeing one of the world’s most ambitious mammalian species reintroduction programs: the breeding of captive Scimitar-horned oryx in Abu Dhabi and reintroducing it back into the wild in Chad, thus seeing a species that is listed as Extinct in the Wild increase its numbers in its natural habitat. Under her leadership, the EAD also established global partnerships like the Eye on Earth environmental data initiative, convened four meetings of IUCN Species Survival Commission since 2008, and hosts one of the Convention on Migratory Species’ two offices. Razan is the second woman to lead the organization in its 72-year history and the first female president from Asia. She is the first IUCN president from the Arab world since 1978.