Poverty and environmental degradation go hand-in-hand throughout the world; each can cause the other. With the global population likely to reach nine billion by 2050 there is an urgent need to address both in tandem when devising new economic development models. 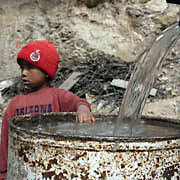 This is the subject of a conference taking place in Paris this week at which IUCN Director General, Julia Marton-Lefèvre is among the high-level speakers.

The conference, ‘Reconciling poverty eradication and quality of the environment - What are the innovative solutions?’ is being held under the patronage of France’s Minister for the Economy, Finance and Industry, Christine Lagarde in the year that France Chairs the G20 Group of Nations.

It brings together prominent French and international speakers, from the scientific, political, non-profit and academic world.

“Today, just one year before the 40th anniversary of the Stockholm Conference and 20 years since the Rio Earth Summit, the moment is right to reflect on how far we have come in our thinking and action on achieving poverty eradication and biodiversity conservation goals,” says Marton-Lefèvre.“Despite some remarkable achievements on both fronts, poverty is still far from being history while biodiversity is increasingly becoming so.”