IUCN has recently appointed a team of distinguished scientists, who will examine the impacts of oil and gas development on rare whales found off the coast of Russia’s Sakhalin Island, just north of Japan. 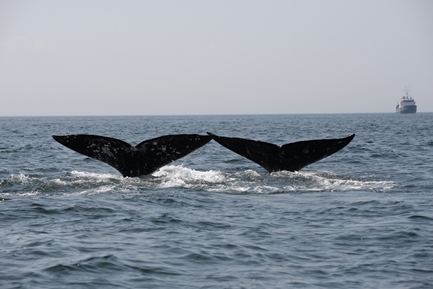 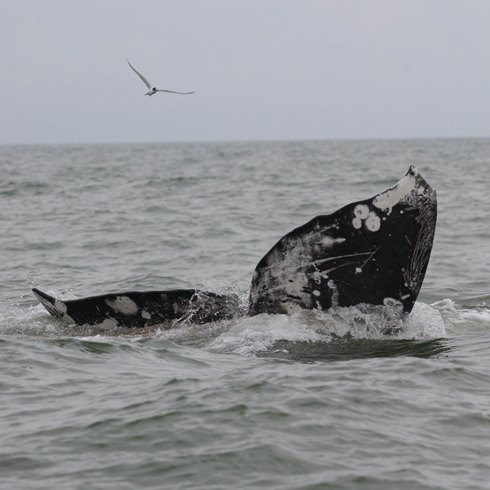 The overall goal of the Western Gray Whale Advisory Panel (WGWAP) is to provide objective, independent, scientific and technical advice on the conservation and recovery of this whale population, listed as Critically Endangered on the IUCN Red List of Threatened SpeciesTM.

In particular, the work will build on the efforts made during the last decade to understand and minimize potential impacts of industry operations on these whales in the area.

For the last 10 years, IUCN has been working with Sakhalin Energy– an oil and gas company with Gazprom, Shell, Mitsui and Mitsubishi as shareholders – and other actors to ensure the long-term conservation of these cetaceans. The feeding areas near Sakhalin – a region with large offshore oil and gas deposits, and active exploitation of other natural resources – are used by the western gray whales every summer and are vital for the maintenance of the population.

“We are encouraged that since 2004, when Sakhalin Energy started the implementation of the Panel’s recommendations, we have witnessed a steady increase of the western gray whale population. This includes an increase of 60% in the number of breeding females - from 27 in 2004 to 43 now, in a total population approaching 200 whales,” said Stewart Maginnis, Director of IUCN’s Nature-Based Solutions Group.

“After a rigorous global selection process, IUCN is confident that, given their distinguished track record, the Panel is well-equipped to tackle its challenging remit. Their advice will continue to guide the companies and can also support regulatory activities on how best to mitigate potential impacts of industrial development on cetaceans and other biodiversity in the region.”

The expertise on the Panel ranges from general cetacean biology and ecology, population assessment and modelling to bio-acoustics and environmental monitoring. It also includes experts who are well-versed in the potential impacts of oil and gas activities, as well as the requirements on environmental and social sustainability.

In addition to the two incumbent co-chairs, Dr Greg Donovan, Head of Science for the International Whaling Commission, and Dr Randall Reeves, Chair of the Cetacean Specialist Group of IUCN Species Survival Commission, the new Panel members are:

In addition, Dr Alexey Yablokov, a prominent scientist, Member and Councilor of the Russian Academy of Sciences, as well as President of the Marine Mammal Council, has been appointed as Emeritus member.

The Panel’s core principles are independence, transparency, accountability and engagement. The experts will serve until the end of 2016, when the current agreement between IUCN and Sakhalin Energy expires.

Sakhalin Energy is the only company in the area that has been working with the Panel to manage its operations in the region. Other major companies operating there include Exxon Neftegas Limited (ENL), Gazprom, Rosneft and others.

The Panel, in its new composition, will meet with Sakhalin Energy and representatives from the banking industry, NGO community, the Russian government and other stakeholders, during the 16th WGWAP meeting, on 22-24 November 2015, in Moscow, Russia.

The full biographies of the Panel members are available here.

About IUCN
IUCN, International Union for Conservation of Nature, helps the world find pragmatic solutions to our most pressing environment and development challenges by supporting scientific research; managing field projects all over the world; and bringing governments, NGOs, the UN, international conventions and companies together to develop policy, laws and best practice. IUCN is the world’s oldest and largest global environmental organization, with more than 1,200 government and NGO members and almost 11,000 volunteer experts in some 160 countries. IUCN’s work is supported by over 1,000 staff in 45 offices and hundreds of partners in public, NGO and private sectors around the world. IUCN's headquarters are located in Gland, near Geneva, in Switzerland.

About WGWAP
Since 2004, IUCN has worked primarily with Sakhalin Energy Investment Company Ltd. in order to provide advice and recommendations on how the company can minimize risks associated with its operations on the western gray whale population and its habitat. As one part of this broad initiative, in 2006 IUCN created a permanent panel of independent scientists – the Western Gray Whale Advisory Panel (WGWAP). The Panel provides scientific advice and recommendations on the company’s operational plans and mitigation measures of its Sakhalin-2 project, one of the world's largest oil and gas operations. Through this constructive cooperation a unique holistic set of state-of-art monitoring and mitigation measures have been developed to reduce risks to the whales. The project demonstrates how critically endangered species can coexist with the economic development and aims at the development of better scientific knowledge of the species, as well as international best practices for the environmental management aspects of oil and gas operations in environmentally sensitive habitats such as Sakhalin.