At COP27 in Sharm el-Sheik, heads of state and senior government officials from the Western Indian Ocean region and representatives of IUCN, the African Union, the UN Economic Commission for Africa and the World Economic Forum discussed progress made on the Great Blue Wall and pledged their support for this innovative ocean conservation initiative. 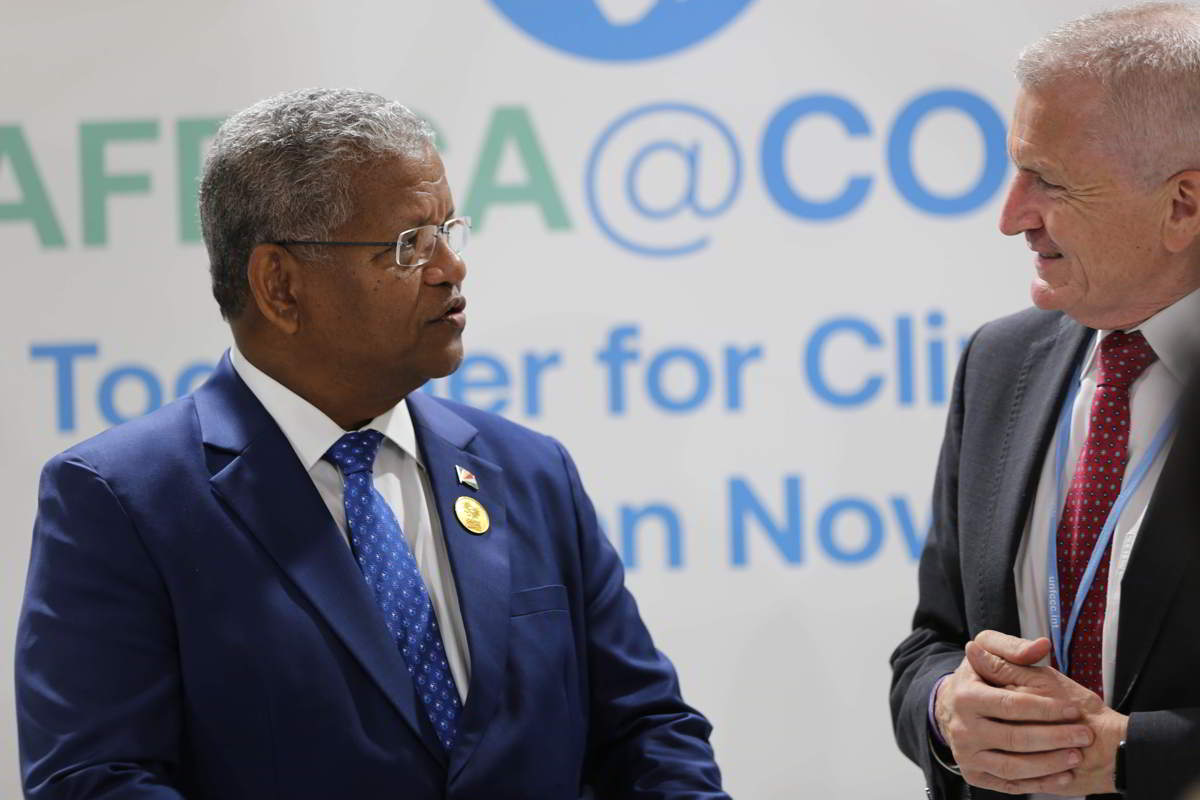 H.E. Wavel Ramkalawan, President of the Republic of Seychelles, in conversation with Stewart Maginnis, Deputy Director General of IUCN, at the COP27 Great Blue Wall side event in Sharm el-Sheik, Egypt, on 7 November 2022. 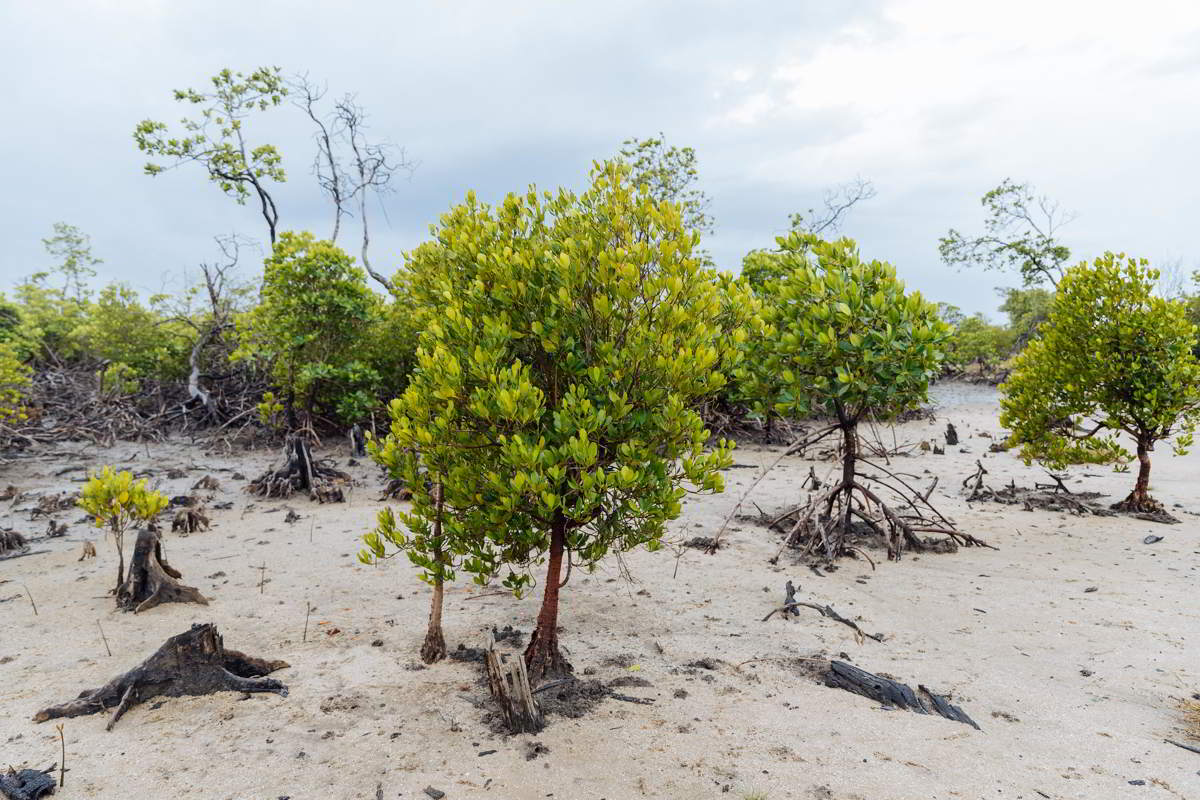 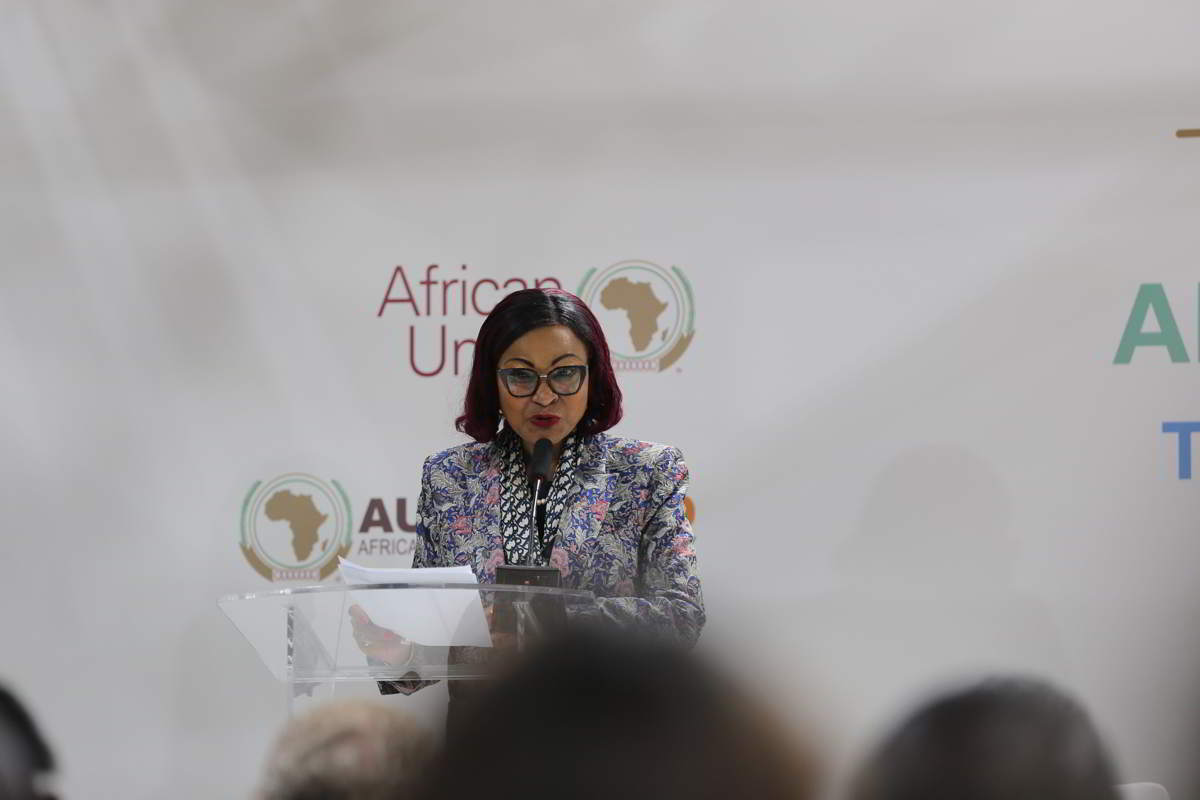 Josefa Leonel Correia Sacko, Commissioner for Rural Economy and Agriculture of the African Union, speaking at the COP27 Great Blue Wall side event in Sharm el-Sheik, Egypt, on 7 November 2022. 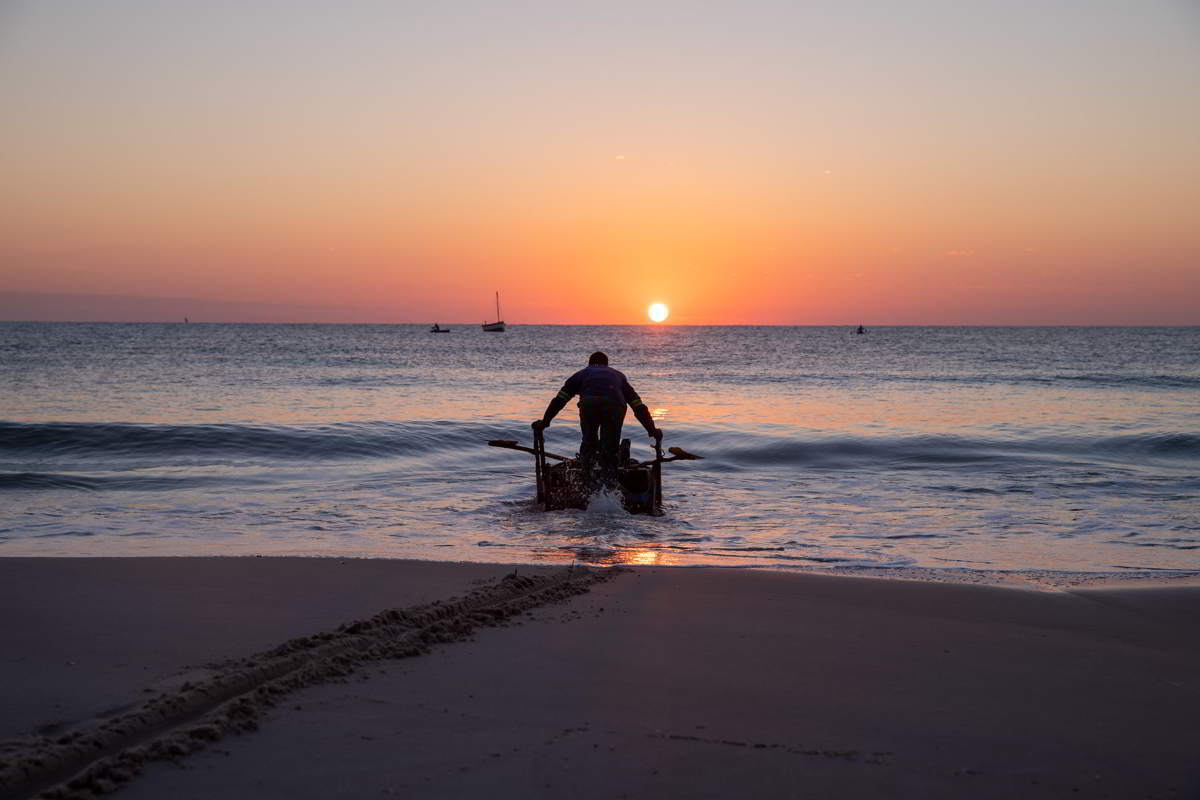 A fisherman in Macufi, Mozambique; part of the Quirimbas Great Blue Wall seascape. 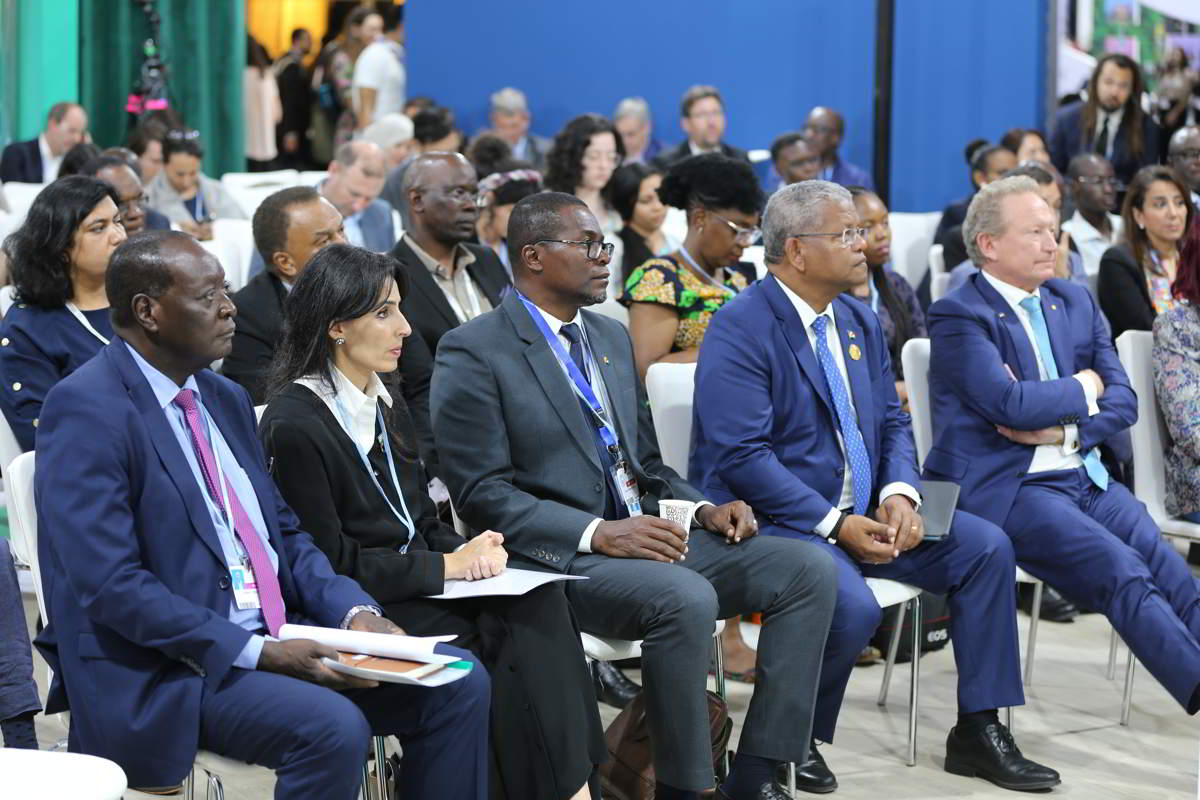 H.E. Wavel Ramkalawan, President of the Republic of Seychelles, alongside other distinguished guests, including IUCN President Razan al Mubarak and IUCN Patron of Nature Andrew Forrest, at the COP27 Great Blue Wall side event in Sharm el-Sheik, Egypt, on 7 November 2022.

The host of the event, President of the Republic of Seychelles, H.E. Wavel Ramkalawan, expressed the Seychelles’ commitment to protecting 100% of his country’s seagrass and mangrove ecosystems by 2023 as part of the Great Blue Wall initiative, a first-of-its-kind network of conserved and restored “seascapes” that help biodiversity recover while also providing sustainable incomes and helping to shelter communities from the impacts of climate change.

“The Great Blue Wall initiative reflects the critical aspects of partnerships, innovation and financing that are needed to mitigate and adapt to a blue future. The initiative, once implemented, has the potential to go beyond the borders of Pan-Africanism”, H. E. President Ramkalawan added.

IUCN President Razan al Mubarak commended the leadership of Western Indian Ocean countries in the Great Blue Wall initiative: “The Western Indian Ocean region is feeling the impacts of climate change most acutely. It is inspiring to see leaders from this region standing up to the challenge, empowering local communities to create the Great Blue Wall together, become stewards of their local ecosystems and show a path towards a nature-positive future that the rest of the world can follow.”

“Scaling up existing projects from the national level to the East-Africa regional level first, and to the continental level further, could represent a game changer, as conservation and restoration of marine and coastal ecosystems will then become eligible to climate finance possibilities,” said Antonio Pedro, Executive Secretary of the UN Economic Commission for Africa. “Setting the financing framework and mechanisms to build an international coalition around the Great Blue Wall is then a policy priority for the institutions supporting this initiative.”

Since the launch of the Great Blue Wall at COP26 in Glasgow, two seascapes have been officially designated: the Tanga Pemba Seascape in Tanzania, an IUCN Category VI Marine Protected Area that connects a number of smaller existing protected and community conserved areas and allows for sustainable use of natural resources to benefit local communities; and the Quirimbas Seascape in Mozambique. 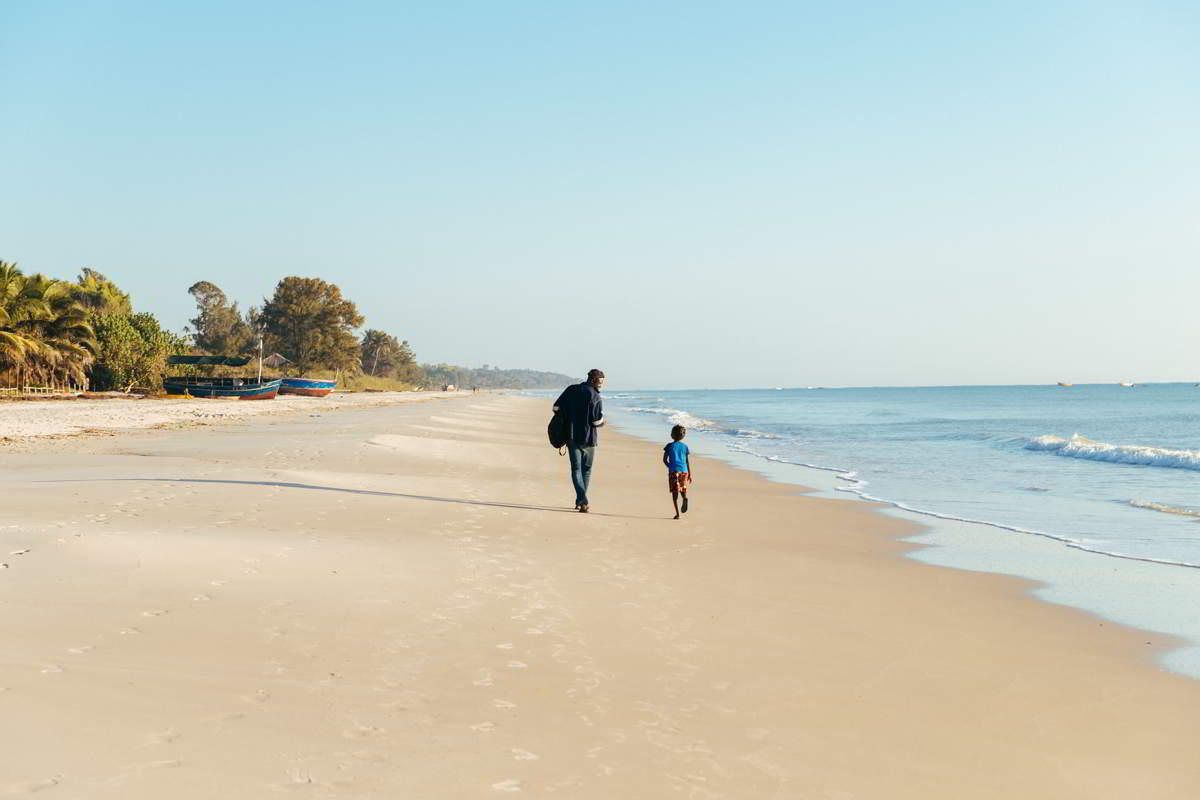 Jadwiga Massinga, National Director for Climate Change at the Ministry of Land and Environment of Mozambique updated participants on progress made since the launch of the initiative at COP26 in Glasgow. She highlighted the ongoing process to establish the North Mozambique Quirimbas Seascape in Cabo Delgado province, which will enlarge the existing Quirimbas National Park by a factor of five to conserve a seascape of 40,000 km2, comprising the entire Quirimbas archipelago and containing five Key Biodiversity Areas.

In addition to the establishment of the two seascapes, IUCN, Ocean Hub Africa, Technoserve and BFA Global have launched an ambitious regenerative blue entrepreneurship program that drives ocean start-up creation and incubation in both of these seascapes and beyond, providing technical assistance, know-how, seed funding and access to investors to local entrepreneurs. More than 20  regenerative blue economy projects have been supported as a result of this programme, with a goal to support 500 ocean start-ups by 2030.

Speaking on behalf of Kenyan President H. E. William Ruto, H.E. Wilber Khasilwa Ottichilo, Governor of the Vihiga province in Kenya, expressed his country’s will to provide leadership on the Great Blue Wall and formally include the initiative in its coastal and marine conservation programmes.

Highlighting the crucial role of the private sector in sustainable ocean initiatives like the Great Blue Wall, Børge Brende, President of the World Economic Forum said: "Just as they are doing on climate, we want to see private sector leaders making bold commitments for the restoration and sustainable use of our ocean. The World Economic Forum looks forward to working in partnership with regional actors to identify and support innovative approaches to seascape conservation and restoration in the lead-up to COP28 in the UAE."

By 2030, the Great Blue Wall aims to establish at least 2 million km2 of Seascapes under conservation in the Western Indian Ocean, which equals 30% of the region’s total ocean area. These seascapes will form a connected network of conserved areas that will deliver conservation, boost livelihoods of 70 million people, and help strengthen resilience to climate change. Under the Great Blue Wall’s vision, participating countries will also identify 2 million ha of critical ecosystems for conservation and restoration including coral reefs, mangroves and seagrass meadows. This would contribute to global climate mitigation efforts by sequestering an estimated 100 million tons of CO2.

Josefa Leonel Correia Sacko, Commissioner for Rural Economy and Agriculture of the African Union, urged partners to endow the Great Bue Wall with the necessary funding and investment as well as technical support. “This is a bankable project, so let us buy in”, she said. Calling this African-led initiative a model of transboundary collaboration to be proud of, Commissioner Sacko reminded participants of a saying from her home country of Angola: “If you want to go fast, go alone. But if you want to go far, go together.”