We join the international conservation community in mourning the loss of Jeremy Mallinson OBE, who served for decades on the Strategic Committee of the IUCN SSC Conservation Planning Specialist Group. 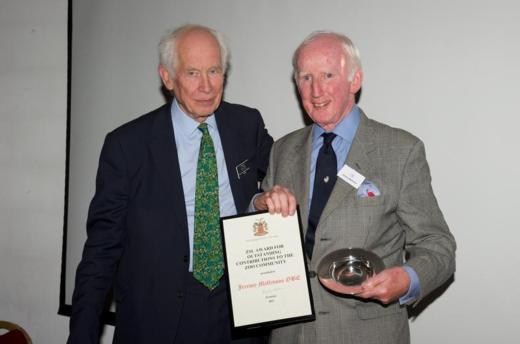 Jeremy Mallinson receiving the prestigious “Award for Outstanding Contributions to the Zoo Community” from the Zoological Society of London.

Director Emeritus of the Durrell Wildlife Conservation Trust and IUCN member, Jeremy Mallinson passed away on 2nd February 2021 leaving behind a huge legacy on species and their conservation. IUCN SSC members expressed their condolences.

“Jeremy Mallinson was a truly unique and very special person, and an enormous asset to the conservation movement, and especially the conservation of endangered species. His combination of deep dedication, delightful charm, clear vision, and ultimately good common sense made his contributions to conservation very special in many ways. I would especially highlight his huge role in the conservation of Brazil's lion tamarins, globally important flagship species unique to Brazil's Atlantic forest and on the verge of extinction in the 1970s. Jeremy's diplomatic skills enabled international collaboration at a level that still serves as a global model to the present day, bringing together Brazilian and international conservationists, government officials, pet keepers holding these animals overseas, and the international zoo community. I had the pleasure of knowing Jeremy for 50 years. I will miss him, and will always remember him as a true gentleman and a wonderful friend.”

“Jeremy had always held a special fascination for a diverse group of small South American monkeys, the marmosets of the tropical forests of the Amazon and the coast of eastern Brazil, the so-called Atlantic Forest. Alarms were raised in the early 1970s about the perilous situation of the lion marmosets, four species in the Atlantic Forest, one the inhabitant of the lowland forests of Rio de Janeiro where its forests had been devastated, besides them being coveted in the pet trade. A meeting, “Saving the Lion Marmoset”, was convened by the National Zoo, Washington, DC, in 1972, to discuss their plight and the means to save them. Jeremy joined the small elite of stalwarts, initially to set up a breeding population in captivity but which, with its success, became an exemplary, ground-breaking endangered species programme.  In the early 1980s, it was discovered that more than 50 golden-headed lion tamarins—for an obscure reason they came to be known as tamarins, when they are in fact marmosets—a different species to the golden lion tamarins of Rio, had been smuggled into Belgium, France, Japan and Hong Kong.  The Brazilian government, knowing of Jeremy’s prowess in the international zoo world, asked him to retrieve them.  A daunting task, which Jeremy accepted, and carried out successfully, with astonishing aplomb.  Considering the practicalities of their management in captivity, Jeremy’s unprecedented masterstroke was to negotiate their registration in the zoo world as the property of the Brazilian government, allowing for a tight, centralized, scientific management of the global captive population, maintaining a healthy genetic diversity and making sure it did not grow to unmanageable proportions.  The insight of this feat was something he was most proud of.  With his success, in 1985, the Brazilian government asked Jeremy to form an international management committee of experts, to be hosted by them, to determine measures for the conservation of the species.  The committees met annually in Brazil until 2003.  Early on, Jeremy created and managed the Lion Tamarins of Brazil Fund, encouraging zoos holding lion tamarins to raise money for their conservation in the wild.  The success of the initiative was such that it continues to this day, providing a perennial source of funds for conservation programmes for the species.

His joint chair for the golden-headed lion tamarin committee was Adelmar F. Coimbra Filho, pioneer primatologist in Brazil, who first raised the alarm about the lion tamarins, and who Jeremy, slightly bowing his head and with his engaging smile, always referred to as "the doyen of Brazilian Primatology."  Coimbra founded the Rio de Janeiro Primate Centre and he would proudly show me Jeremy's signature in the visitor's book, poke his finger at it, and say that Jeremy was one of the most highly respected people to have honoured him in visiting his beautiful centre in the mountains near Rio.

Going back to the Lion Tamarin Committees, whenever there was some tension in the air, some difficult decision to make, he would give us a pep-talk, making us all feel rather like naughty school children.  A concept which he frequently evoked was the advantage we had of being able to call on the “World’s Best Resources” to get the job done.  "Jeremy!", everybody would say in unison, "You are our World’s Best Resource."

Jeremy was admired, respected, and loved by all who knew him in Brazil.  The lion tamarin committee meetings would last four or five days, and Jeremy’s skill and gentle charm in moderating disagreements, quelling discord or smoothing ruffled feelings were a constant source of admiration and amazement.  He was an ambassador, admired for his integrity, his kindness and so special and so very British humour. It was such a privilege to have worked with him and known him.”