In the recently held 10th meeting of the Trans-Boundary Manas Conservation Area (TraMCA) between Indian and Bhutanese conservation comrades, D.P. Bankhwal of the National Tiger Conservation Authority (NTCA), Guwahati, said, “Tigers are akin to canaries in a coalmine - their populations are symbolic of the health of ecosystems.” 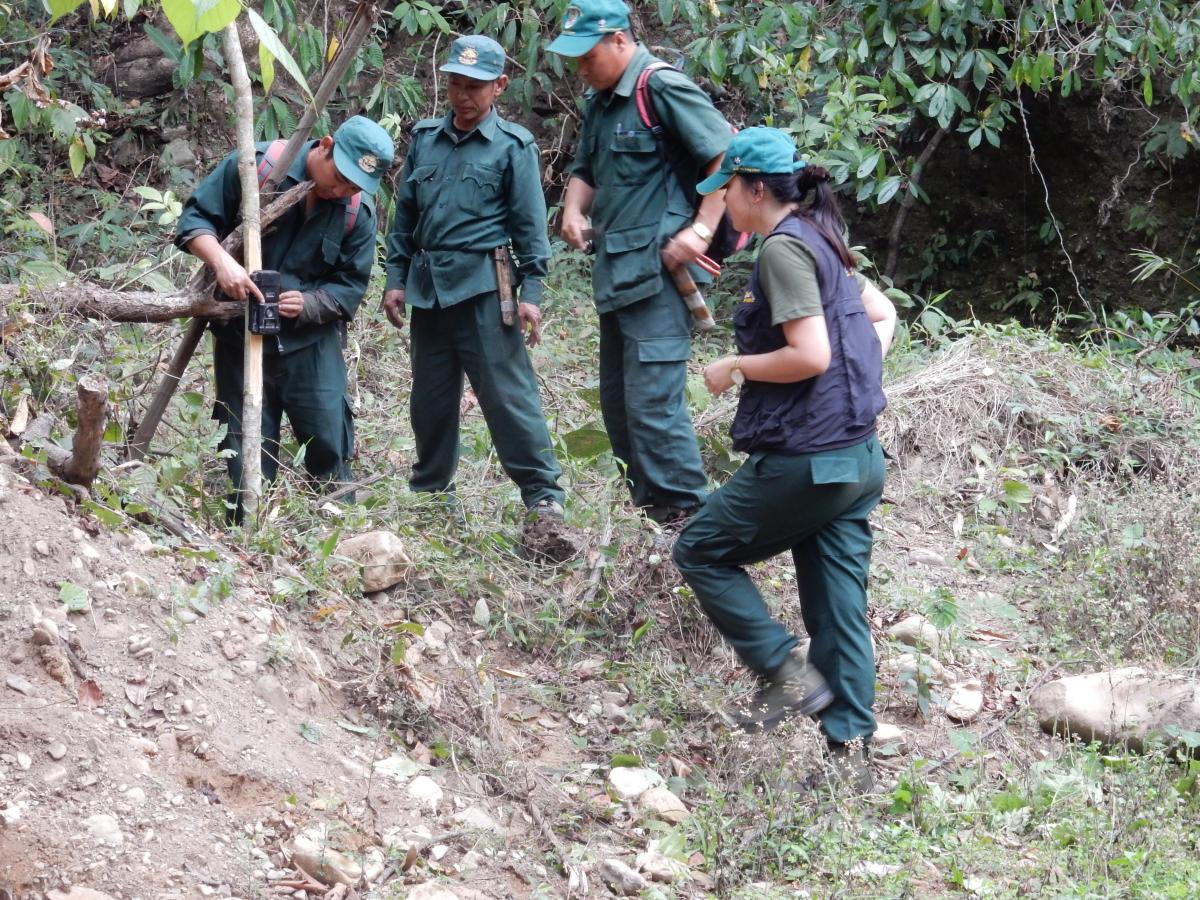 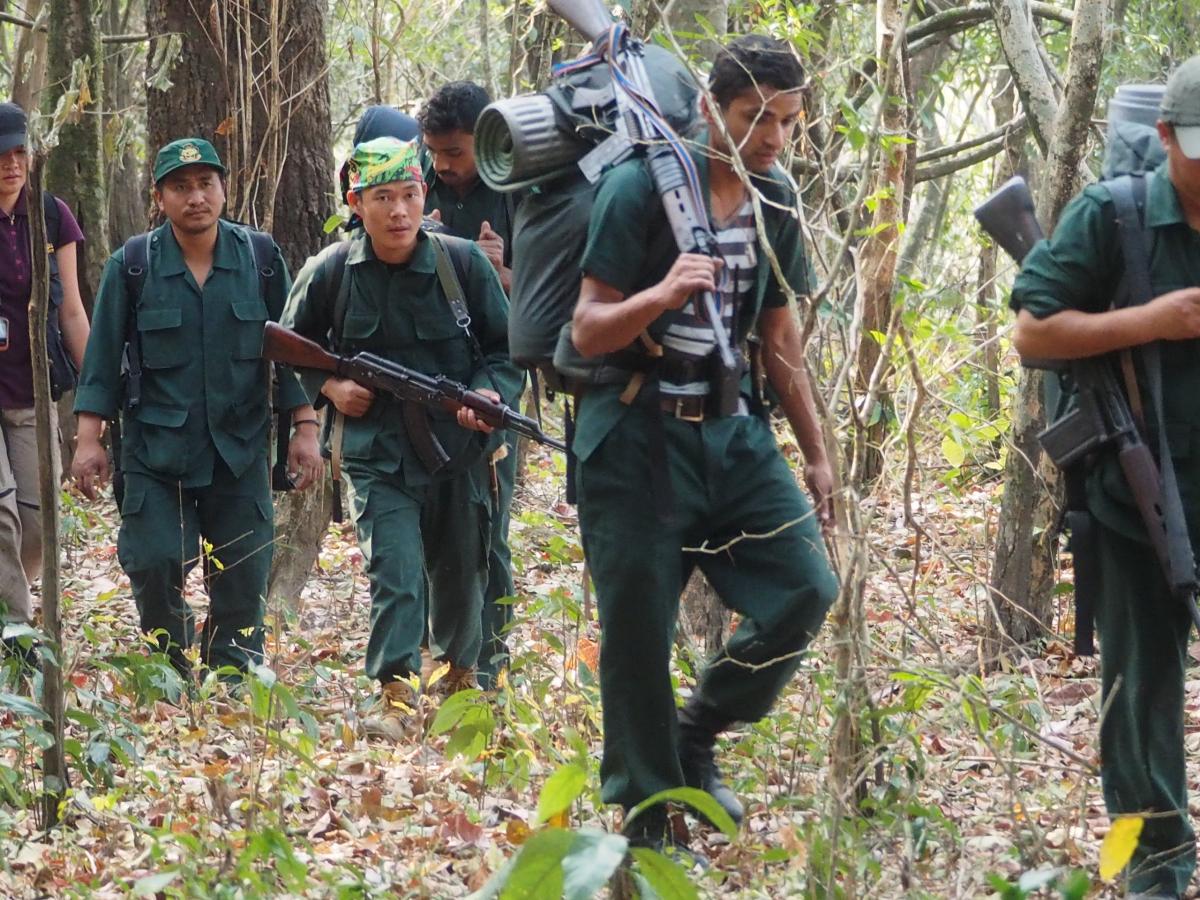 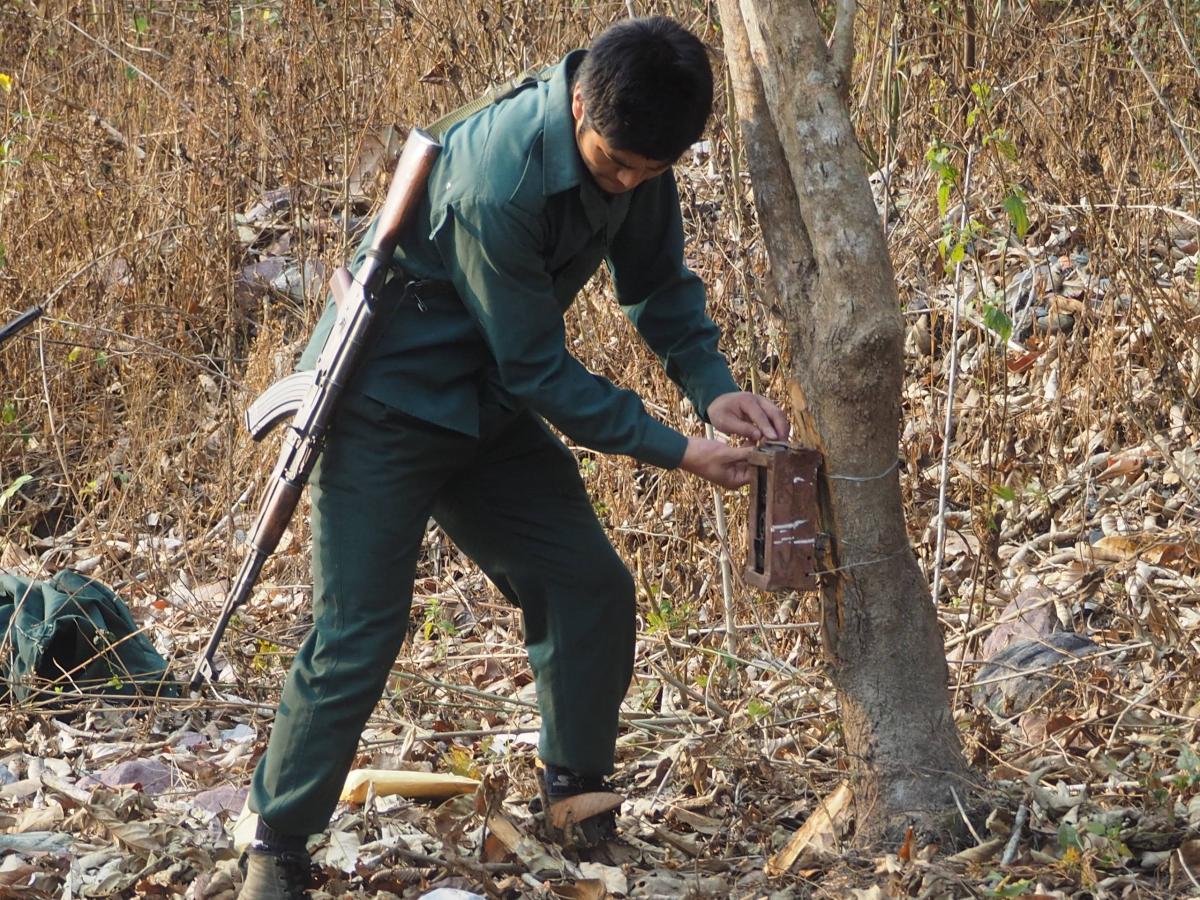 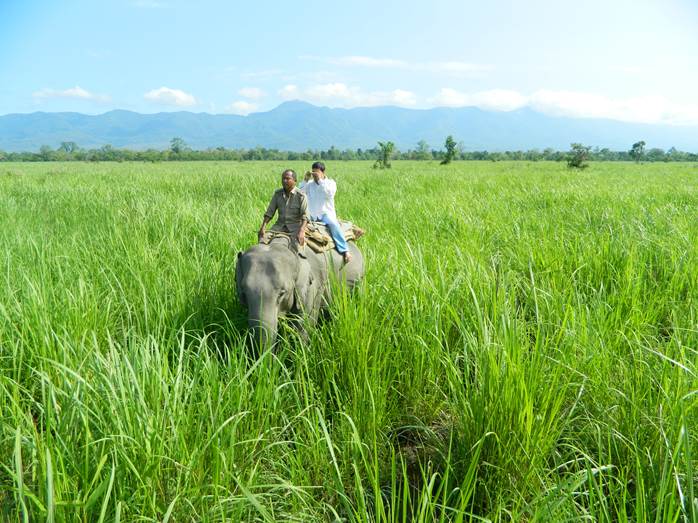 Photo: Scouring the sternous Manas Landscape on Elephant Back- a crucial element of data collection / Aaranyak 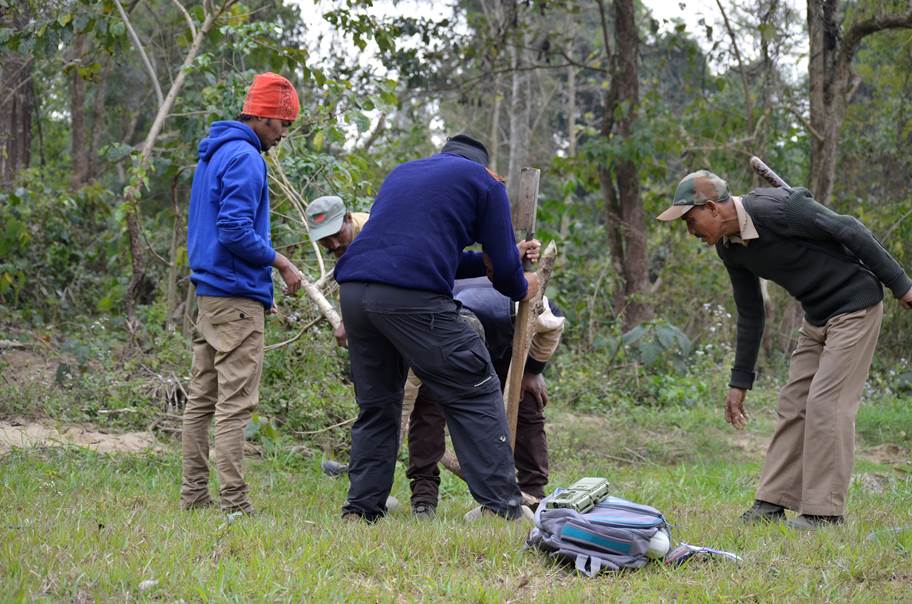 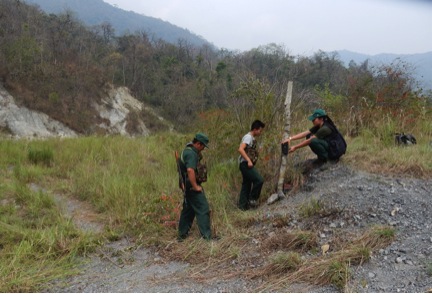 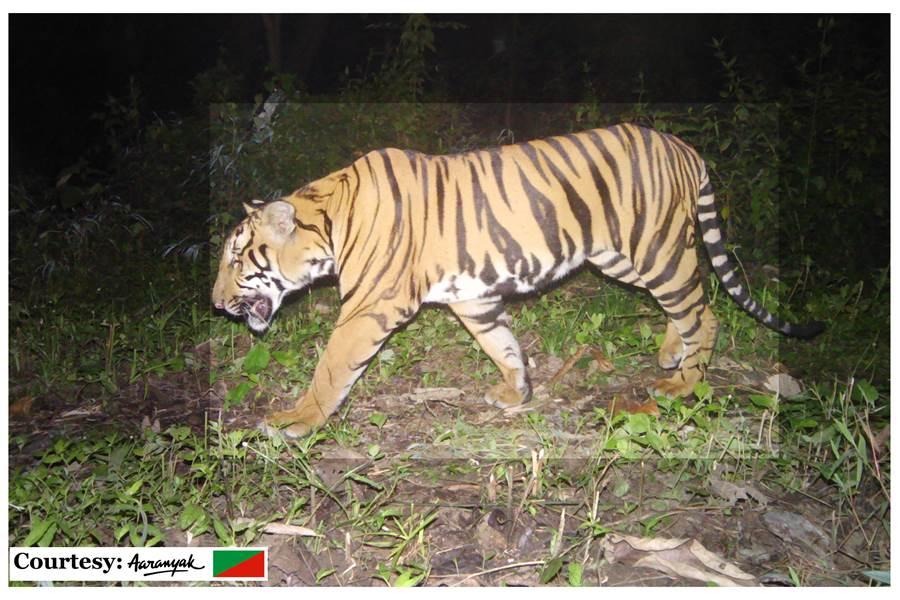 Photo: A tiger camera-trapped at the Panbari Range of Manas National Park / Aaranyak 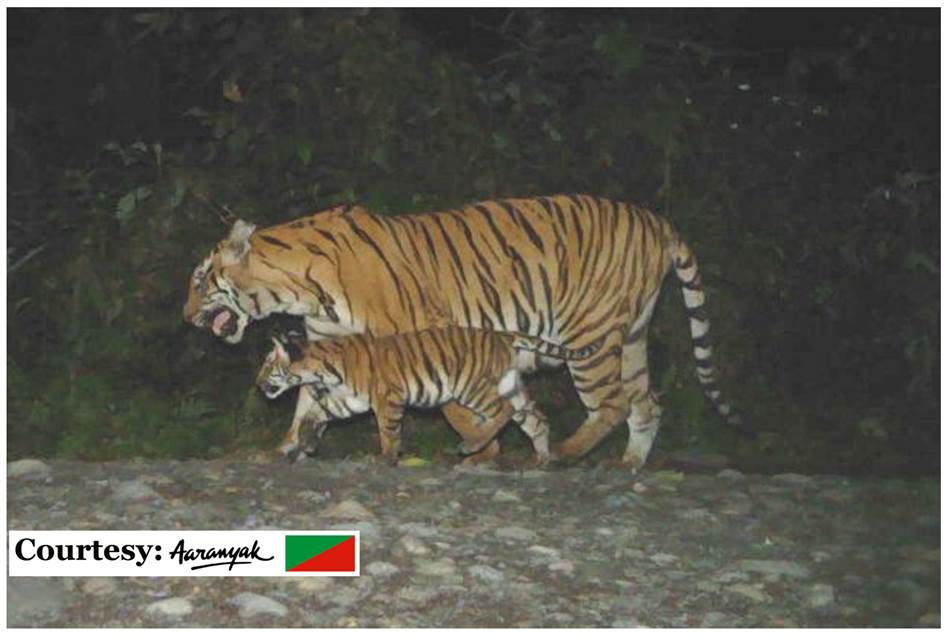 Photo: A Tigress Camera- captured with her cub in Manas Tiger Reserve / Aaranyak

In the 1980s, the Manas National Park in Assam, India, contiguous to the north with the Royal Manas National Park of Bhutan, was home to a sizeable population of the endangered Royal Bengal Tiger- the National Animal of India and Bangladesh. Owing to a long, dark period of civil unrest and in the face of illegal wildlife trade, habitat loss and human-wildlife conflict, the tiger population at Manas had suffered a sharp decline. However in recent times, against all odds, a small population of the Big Cat is seen to be slowly gaining ground in the Manas Landscape. The TraMCA is a passionate initiative of conservation agencies in both countries to secure and grow this thriving population of the grand canary of our golden Manas- the Tiger. “Reinforcing wildlife law enforcement and patrolling, strengthening trans-boundary conservation linkages and continuity of joint monitoring of tigers across TraMCA, are paramount in order to ensure that tigers thrive and persist into the future”, says Singye Wangmo, Senior Forestry Officer, Royal Manas National Park, Bhutan.

Since the declaration of Manas Tiger Reserve in 1973, the Forest Department of Assam and NTCA has been extensively investing in the landscape, joining hands with several organizations which have been complementing their conservation efforts. Aaranyak, since its arrival in the landscape in the early 1990s, has been actively partnering with the Forest Department, for protection and conservation of the recovering population of tigers. Aaranyak, WWF India and the Forest Department of BTC (Bodoland Territorial Council) have joined hands with and the Park Management of Royal Manas National Park and WWF Bhutan, to study tigers and other species in the Manas Landscape. As a result, the Trans-Boundary Manas Conservation Area (TraMCA) was conceptualized in 2011 with the vision to jointly developing and managing a transboundary conservation area between Bhutan and India, for the benefit of people and wildlife.

The TraMCA landscape with an area of over 6500 sq. km forms a vital mosaic of conservation spaces across the Eastern Himalayas, and covers the entire Manas Tiger Reserve in India, four protected areas in Bhutan and also two biological corridors. The Manas Tiger Reserve in India and Royal Manas National Park in Bhutan form the core of this biologically outstanding trans-boundary region that is home to tigers, elephants, rhinos and more than 1,500 species of mammals, birds and vascular plants. The Manas River flowing through Royal Manas National Park and Manas National Park also makes both parks an important watershed area in the region. The landscape and its surroundings support over 10 million people in India and Bhutan with its services.

One of the major feats achieved through institutionalization of the TraMCA has been the Joint Scientific Monitoring Survey of tigers, its co-predators, preys and habitats using camera traps, initiated since 2010-11 between RMNP of Bhutan and MNP of India. The surveys culminated in a joint report titled “Tigers across Borders”, which was launched in Bhutan in October 2012 at the second Asian Ministerial Conference on Tiger Conservation. The most recent camera trapping survey was initiated in 2015 in Bansbari and Bhuyanpara Ranges of MNP and Umling and Manas Ranges of RMNP, covering an area of 240 sq. km and 320 sq. km respectively in India and Bhutan. “A team of 8 members from Aaranyak covered more than 70% of the Manas Landscape with camera traps on the Indian side. We faced severe weather and topography challenges but we also experienced scenes of spectacular beauty; it gives us all-the-more reason to revere and assume ownership of this inspirational landscape”, says Dipankar Lahkar, Manager and Researcher at Aaranyak, beaming with contentment.

From a total of 160 survey grids and sampling effort of 10800 camera trap nights, 581 tiger images were obtained out of which 11 and 14 tigers were identified from RMNP and MNP respectively. 21 tigers were estimated to occur in TraMCA with an estimated density of 0.84 tigers per 100 km2. Four tigers were found to have transboundary movements and were common to both landscapes.  This further strengthens the arguments why the TraMCA landscape in India and Bhutan should be protected and managed as a single unit of habitat across the international border.

The presence of a healthy core breeding tiger population such as the one in Manas signifies that the TraMCA could serve as a source population of tigers for Bhutan and parts of Northeast India. In light of the importance of this trans-boundary space, a step toward institutionalizing a joint vision was taken in December 2012 in a workshop organized in Phuntsholing Bhutan where the TraMCA Action Plan was developed.

The Manas Tiger Conservation Program (MTCP) launched by Aaranyak in November 2015, with the massive responsibility of doubling the number of wild tigers in the Manas landscape in the coming decade, is yet another step towards conservation of the tiger in Manas. It is a collaborative effort of the Forest Department (BTC), Panthera, Wildlife Conservation Trust of India and Awely of France and sponsored by IUCN’s Integrated Tiger Habitat Conservation Programme.

Today, as you read this, the MTCP Team is working closely at the grass-roots with communities and foresters in Manas, and also collaborating with Bhutanese partners in the larger TraMCA, extending all possible support in ensuring the protection of the tiger and its habitats. Alternative livelihood opportunities are also being explored for the section of the community whose livelihoods are entirely dependent on the natural resources of the Park. “Manas has potential to double its tiger population in ten years and that motivates us to support capacity building of the frontline forest staff to improve protection of the Park. And also to pursue livelihood skill development of the fringe communities around Manas, to reduce anthropogenic pressure on the forest”, says M Firoz Ahmed, Head of Tiger Research and Conservation Division at Aaranyak.

Ten years is a long time and the big tiger dream for Manas, is a bright ray of hope in the horizon; but as pointed by Tenzin Wangchuk, Park Manager of the Royal Manas National Park, Bhutan, “Conservation in TraMCA has been and will be a towering challenge. But we must also remember that Darr Ke Aage Jeet Hai (When we walk past challenges, we come upon Victory).”