Gender equality is a human right - and prerequisite for sustainable development and achieving IUCN’s mission. IUCN is committed to advancing gender equality, including through women’s empowerment, as a Union that understands the importance of equal opportunity and inclusion, and whose policies respect and promote diversity. 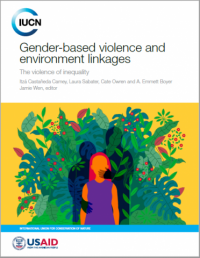 Publication | 2020
Gender-based violence and environment linkages
Rooted in discriminatory gender norms and laws and shrouded in impunity, gender-based violence (GBV) occurs in all societies as a means of control, subjugation and exploitation that further… 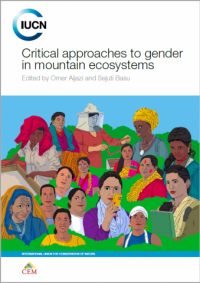 Publication | 2021
Critical approaches to gender in mountain ecosystems
Women play a key role in nature conservation, yet they often lack the inputs, technologies, training and extension services, and various enablers and linkages that can enhance the effectiveness of… Blog | 22 Apr, 2022
The Gender-Based Violence and Environment Linkages Center works with Indigenous…
Indigenous women and girls are key actors in maintaining environmental sustainability – so why are they experiencing rising gender-based violence in connection with the environment and what can be…
Overview
Resources
News & Events

While gender-responsive efforts are led and supported across the Union, IUCN’s Human Rights in Conservation Team – part of the Centre for Society and Governance – spearheads knowledge generation; policy and programme technical support at multiple levels; and capacity building to and with a wide range of partners and stakeholders – including IUCN members, offices, commissions and networks.

Stakeholders have read our GBV and the environment report
Description

IUCN published the first-ever largescale report on gender-based violence and environment linkages, with media coverage reaching over one billion people – driving the conversation forward on how environmental programming can better understand and address issues and risks.

What is gender equality

Gender equality is the state in which all people, regardless of their gender, have equal rights, freedoms, conditions and opportunities. It does not mean that people – for example women and men – become the same, but rather that they have equal life chances and are valued equally. This applies not only to equality of opportunity but also to equality of impact and benefits arising from economic, social, cultural and political development – as well as opportunity to shape and influence those values, norms and systems.

Gender equality and women’s empowerment are essential for the sustainable use of biodiversity and must be an essential component of the new Post-2020 Global Biodiversity Framework (GBF).

This Gender Equality and Women’s Empowerment Policy recalls, reaffirms and further strengthens IUCN’s commitment to realising gender equality and women’s rights and empowerment and puts into place requirements for embedding a gender-responsive approach into its Programme and project portfolio.

UNFCCC COP27 is taking place at a time of considerable global turmoil, with growing economic hardship and food and energy insecurity worsening the effects of a still ongoing pandemic. Yet, as the extreme weather events of 2022 – catastrophic floods, droughts and hurricanes – illustrate, the climate crisis is also continuing unabated, hitting vulnerable communities the hardest and exacerbating global inequalities. COP27, therefore, provides an opportunity to the world’s political leaders to demonstrate their commitment to raise collective global ambition and action to realise the goals of the Paris Agreement.

Mainstreaming Gender Across the IUCN Programme

IUCN's Gender Equality and Women's Empowerment Policy requires gender-responsive action across the programme and project portfolio, influencing collaborations, strategies and impacts around the world. The Human Rights in Conservation Team gender experts, working in close cooperation with other diverse teams and partners, provide tailored support for gender mainstreaming, including through building and leveraging knowledge and tools; advising on partnerships; and developing and ushering methodologies and other technical support to strengthen the institutionalisation of gender equality across IUCN offices, commissions and member networks.

IUCN has been a thought leader on gender-environment issues for decades, generating knowledge and awareness on critical linkages between gender equality and environmental outcomes. As the global environmental agenda has evolved, IUCN has been at the forefront of producing new knowledge and guidance to ensure women's empowerment and gender equality is meaningfully integrated into technical fields such as REDD+; Forest Landscape Restoration; Climate Change Action Planning, including Nationally Determined Contributions;  and ensuring progress and accountability on meeting gender commitments anchored  throughout the Sustainable Development Goals.

IUCN has been dedicated to identifying and filling knowledge gaps on gender and climate change for many years. The Gender and Environment Resource Center supports the goals and delivery of numerous projects focused on advancing gender equality and women’s empowerment throughout natural resource management activities. The knowledge and action platforms are supported by a single, large library of curated resources on gender-environment topics.

Among the world’s most pressing and complex challenges, climate change is not gender neutral. Over the last decade, tremendous progress has been made by the global community in recognising the differentiated causes and impacts of climate change and considering proactive, effective, inclusive, and gender-responsive solutions.

Implementing programming across 160 countries around the globe, IUCN plays a key role in supporting countries and their stakeholders to improve their capacities for and commitments to gender-responsive action across climate change, biodiversity, desertification and degradation, and other sustainable development spheres. IUCN has supported more than two dozen countries in developing national climate change gender action plans (ccGAPs), which build on a country’s national climate change policy, strategy, or plan – identifying gender gaps and gender-responsive actions across each priority sector to enhance rights-based, gender-responsive, socially inclusive climate decision-making, programming, and practice. For example, IUCN is supporting the Government of Guatemala and its stakeholders – including in particular diverse women, Indigenous Peoples, and others commonly marginalised –  to implement commitments to gender equality and climate action, enriching strategies for implementation of the country’s Nationally Determined Contribution and relevant cross-sector policies. IUCN also provides sector-specific training, technical support, and capacity building to strengthen systems-wide awareness and skills for gender mainstreaming across environmental arenas—as well as the inclusion of environmental issues in major women’s rights and gender equality arenas. The Art of Implementation: Gender Strategies Transforming National and Regional Climate Change Decision Making summarises the ccGAP process and spotlights countries’ sector-specific activities. Roots for the Future also summarises this and related processes.

Recognising that gender mandates at the global level create enabling conditions for national-level action, and vice versa, IUCN has been a key player driving attention to gender issues in international environmental policymaking spheres since before the Earth Summit. Informing and likewise contributing to the implementation of Gender Action Plans across the Rio Conventions – including those of UNFCCC, UNCCD and CBD, as well as gender mandates of Ramsar and other key processes, IUCN also collaborates with major donors and finance  mechanisms, from the African Development Bank to the NDC Partnership to continuously advance gender-responsive environmental and climate action.

Among the world’s most pressing and complex challenges, climate change is not gender neutral. Over the last decade, tremendous progress has been made by the global community in recognising the differentiated causes and impacts of climate change and considering proactive, effective, inclusive, and gender-responsive solutions.

IUCN offers technical guidance in major decision-making spheres on climate change such as the UNFCCC, including to implement its Gender Action Plan. IUCN has extensive experience collaborating with State and non-state members and stakeholders to improve policy across sectors, bridge siloes and strengthen implementation frameworks that realise gender equality and climate change commitments, in tandem. Gender-responsive action on climate change is, among other things, crucial to meeting the SDGs.

As evidenced through well over two dozen processes, Climate Change Gender Action Plans are nationally recognised strategies with a unique methodology for training and building the capacity of women and women’s organisations on the linkages between gender and climate change. This is done through a series of workshop trainings with local women identified as leaders in their communities, and also with women’s advocacy organisations that support their rights and development, not only in the environmental sector but across sectors to increase their knowledge on these issues.

At the request of the Government of Guatemala’s Ministry of Environment and Natural Resources (MARN), the IUCN ccGAP methodology is being applied to support stakeholders through a participatory, multi-stakeholder process to develop and support implementation of the Guatemala’s ccGAP starting in 2022. The ccGAP will support the Guatemala government to implement commitments to gender equality and environmental sustainability.

Partnering to advance gender in the environment

Advancing Gender in the Environment (AGENT)

A partnership between IUCN and the U.S. Agency for International Development (USAID), Advancing Gender in the Environment (AGENT) works to increase the effectiveness of environmental programming through robust gender integration and improves gender equality and women’s empowerment across environmental spheres. AGENT fills critical information gaps, makes the case for gender integration and provides tailored technical support to USAID and IUCN activities.

The Resilient, Inclusive, & Sustainable Environments (RISE) Challenge, funded by USAID, supports organisations to innovatively adapt and implement approaches to address gender-based violence (GBV) in environmental programming. The RISE Challenge aims to spur greater awareness of the intersection between environmental degradation and GBV, test new environmental programming approaches to prevent and respond to GBV, share learning on interventions and policies and elevate attention to GBV-environment and attract commitments from other organisations. In June 2022, under AGENT and as a strategic intervention of the GBV-ENV Center, IUCN has relaunched the next phase of the RISE  grants mechanism, harnessing RISE learning to date and tapping its 1,500+ members to scale up attention, cross-sector cooperation, and rights-based strategies and results in supporting projects contributing toward ending GBV and securing a healthy environment for all. Blog | 29 Nov, 2018
16 Days of Activism to shine a spotlight on gender-based violence (GBV) and the…
Every year, for 16 days, from the International Day for the Elimination of Violence against Women on 25 November to Human Rights Day on 10 December, people from all over the world campaign to raise… 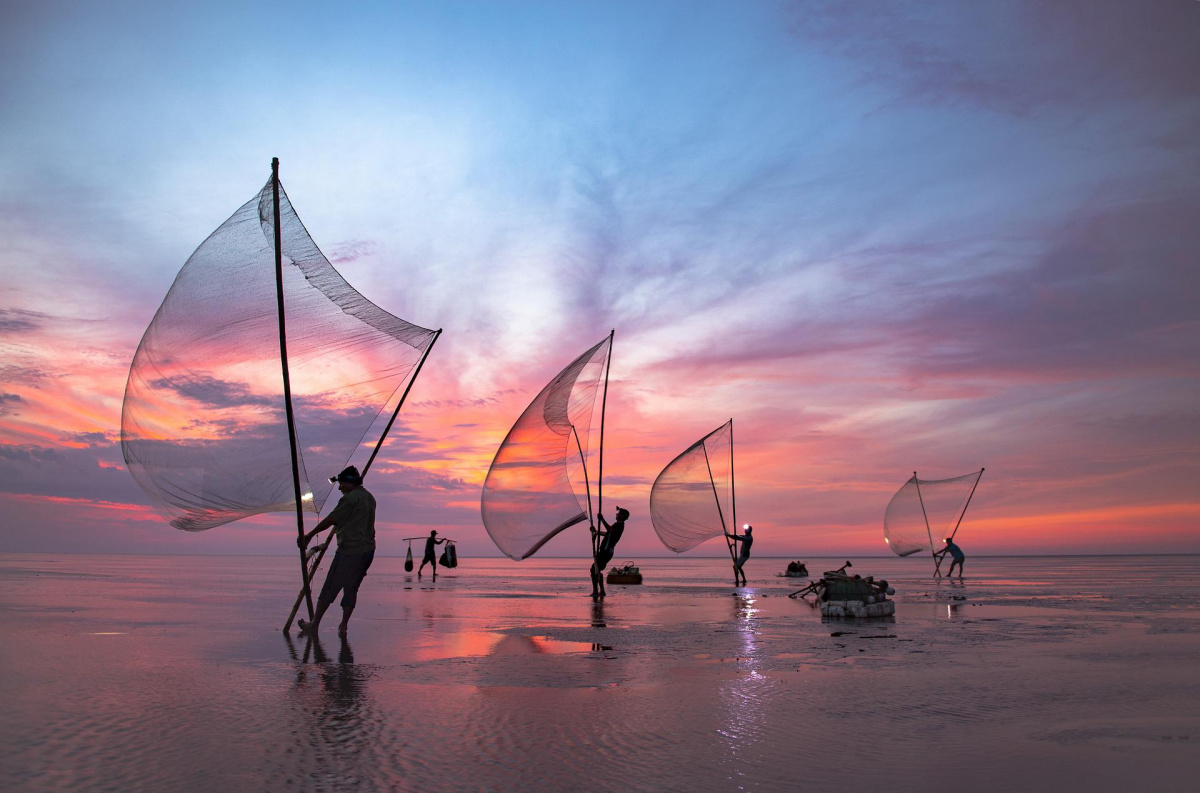 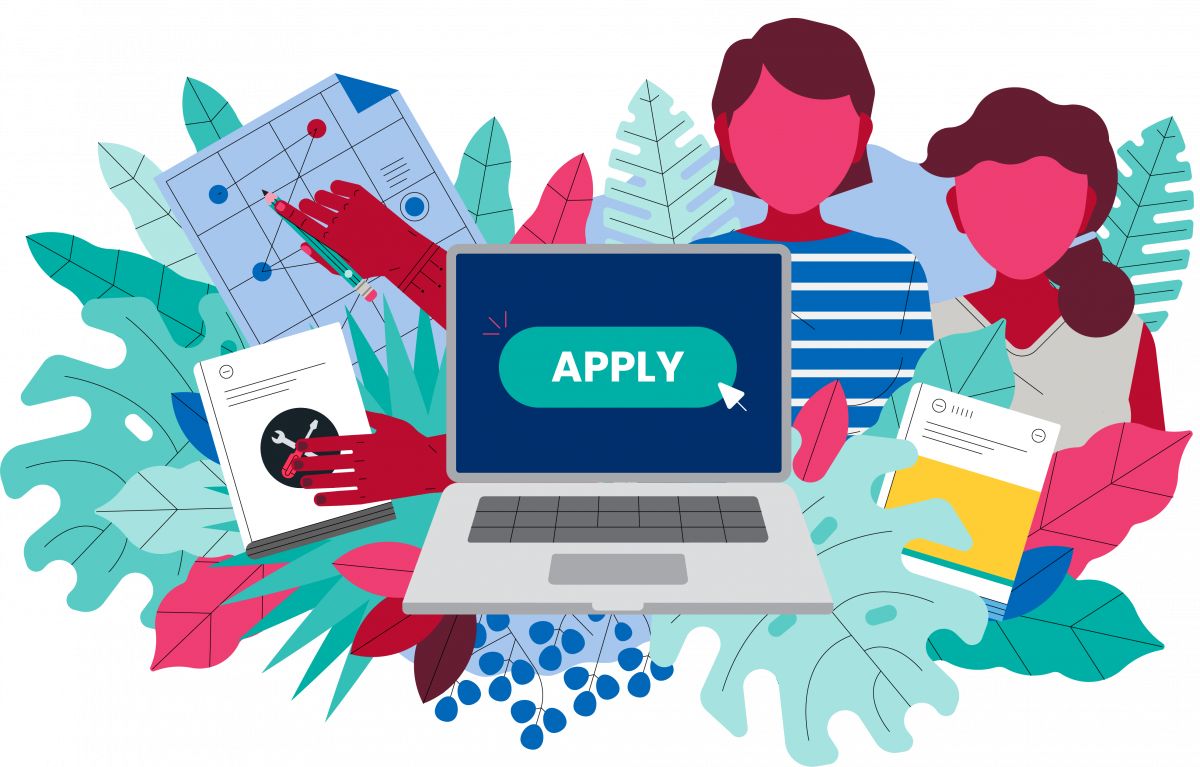