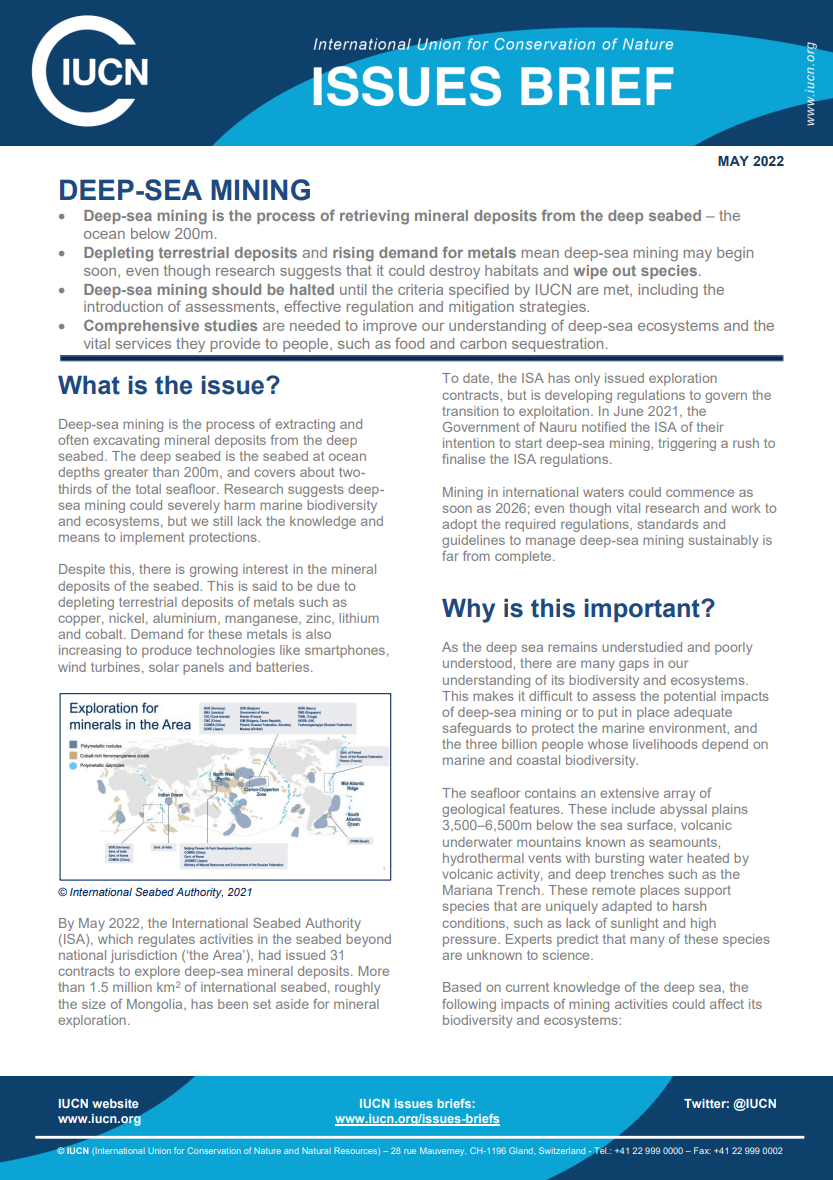 Deep-sea mining is the process of extracting and often excavating mineral deposits from the deep seabed. The deep seabed is the seabed at ocean depths greater than 200m, and covers about two-thirds of the total seafloor. Research suggests deep-sea mining could severely harm marine biodiversity and ecosystems, but we still lack the knowledge and means to implement protections.

Despite this, there is growing interest in the mineral deposits of the seabed. This is said to be due to depleting terrestrial deposits of metals such as copper, nickel, aluminium, manganese, zinc, lithium and cobalt. Demand for these metals is also increasing to produce technologies like smartphones, wind turbines, solar panels and batteries. 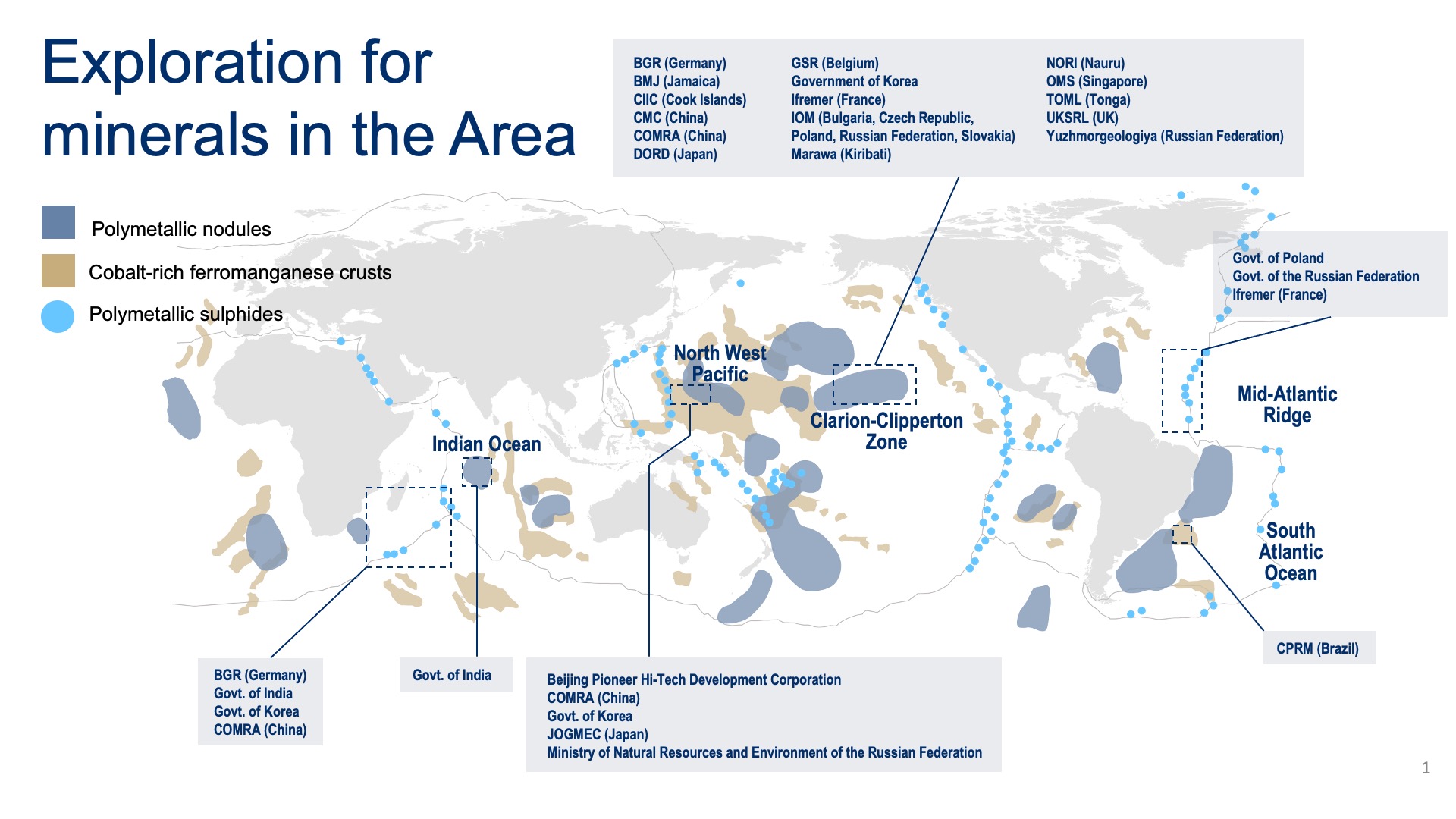 By May 2022, the International Seabed Authority (ISA), which regulates activities in the seabed beyond national jurisdiction (‘the Area’), had issued 31 contracts to explore deep-sea mineral deposits. More than 1.5 million km2 of international seabed, roughly the size of Mongolia, has been set aside for mineral exploration.

To date, the ISA has only issued exploration contracts, but is developing regulations to govern the transition to exploitation. In June 2021, the Government of Nauru notified the ISA of their intention to start deep-sea mining, triggering a rush to finalise the ISA regulations.

Mining in international waters could commence as soon as 2026; even though vital research and work to adopt the required regulations, standards and guidelines to manage deep-sea mining sustainably is far from complete.

Why is this important?

As the deep sea remains understudied and poorly understood, there are many gaps in our understanding of its biodiversity and ecosystems. This makes it difficult to assess the potential impacts of deep-sea mining or to put in place adequate safeguards to protect the marine environment, and the three billion people whose livelihoods depend on marine and coastal biodiversity.

The seafloor contains an extensive array of geological features. These include abyssal plains 3,500–6,500m below the sea surface, volcanic underwater mountains known as seamounts, hydrothermal vents with bursting water heated by volcanic activity, and deep trenches such as the Mariana Trench. These remote places support species that are uniquely adapted to harsh conditions, such as lack of sunlight and high pressure. Experts predict that many of these species are unknown to science.

Based on current knowledge of the deep sea, the following impacts of mining activities could affect its biodiversity and ecosystems:

Disturbance of the seafloor

The digging and gauging of the ocean floor by machines can alter or destroy deep-sea habitats. This leads to the loss of species, many of which are found nowhere else, and the fragmentation or loss of ecosystem structure and function. It is the most direct impact from deep-sea mining and the damage caused is most likely permanent. 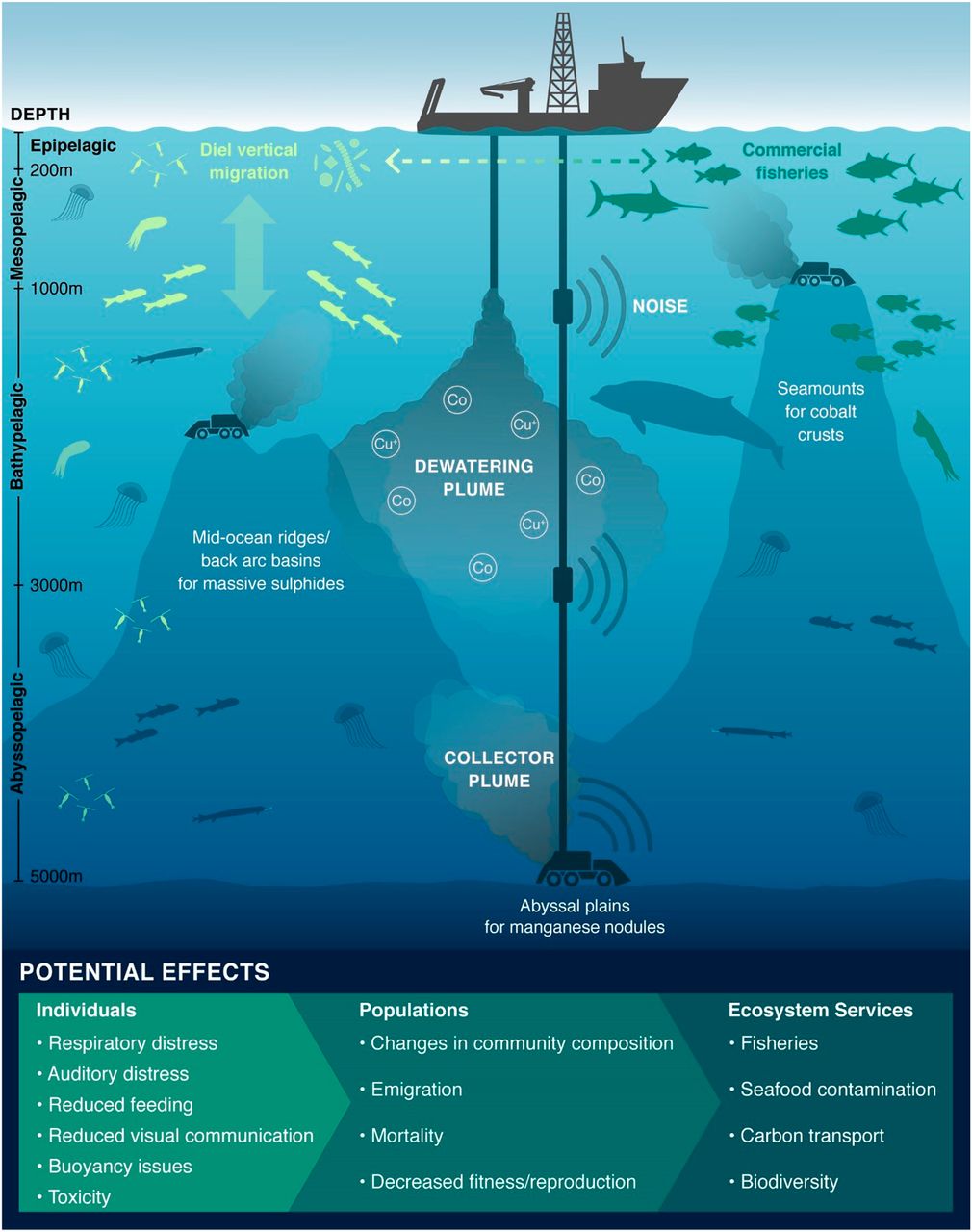 Deep-sea mining will stir up fine sediments on the seafloor, creating plumes of suspended particles. This is exacerbated by mining ships discharging waste water at the surface. Scientists are concerned these particles may disperse for hundreds of kilometres, take a long time to resettle on the seafloor, and affect ecosystems and commercially important or vulnerable species. For instance, such plumes could smother animals, harm filter-feeding species, and block animals’ visual communication.

Species such as whales, tuna and sharks could be affected by noise, vibrations and light pollution caused by mining equipment and surface vessels, as well as potential leaks and spills of fuel and toxic products.

Under the United Nations Convention on the Law of the Sea (UNCLOS), the Area and its mineral resources are the common heritage of humankind. This means they must be managed on behalf of and in the interests of all humanity including through: the sharing of economic benefits; support for marine scientific research; and the effective protection of the marine environment.

At the IUCN World Conservation Congress in Marseille (September 2021), IUCN Members adopted Resolution 122 to protect deep-ocean ecosystems and biodiversity through a moratorium on deep-sea mining unless and until a number of conditions are met. These include:

Reliance on metals from mining can be reduced by redesigning, reusing and recycling. In addition, research should focus on creating more sustainable alternatives to their use because deep-sea mining could irreparably harm marine ecosystems, and limit the many benefits the deep sea provides to humanity.