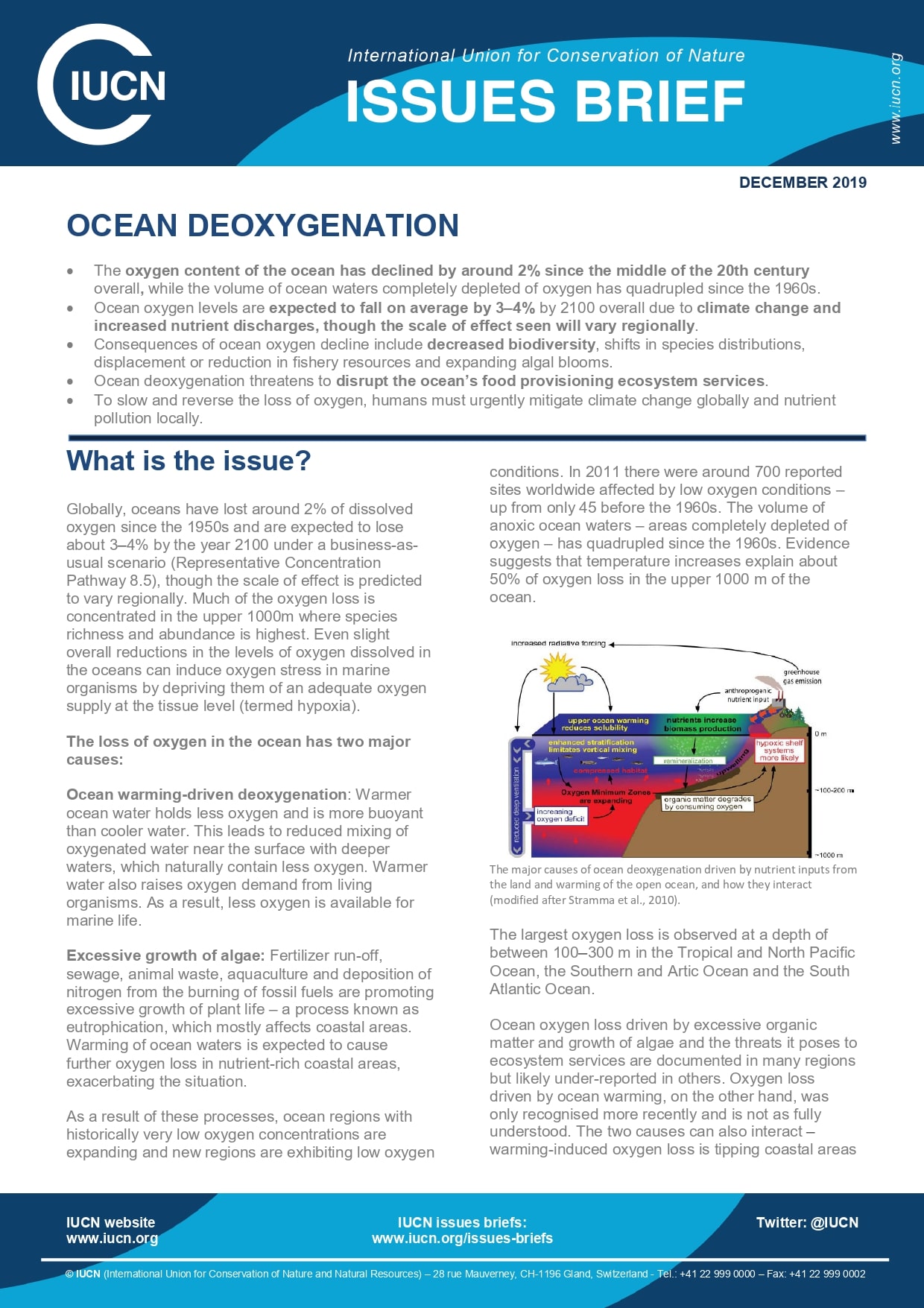 What is the issue ?

Globally, oceans have lost around 2% of dissolved oxygen since the 1950s and are expected to lose about 3–4% by the year 2100 under a business-as-usual scenario (Representative Concentration Pathway 8.5), though the scale of effect is predicted to vary regionally. Much of the oxygen loss is concentrated in the upper 1000m where species richness and abundance is highest. Even slight overall reductions in the levels of oxygen dissolved in the oceans can induce oxygen stress in marine organisms by depriving them of an adequate oxygen supply at the tissue level (termed hypoxia).

The loss of oxygen in the ocean has two major causes:

Excessive growth of algae: Fertilizer run-off, sewage, animal waste, aquaculture and deposition of nitrogen from the burning of fossil fuels are promoting excessive growth of plant life – a process known as eutrophication, which mostly affects coastal areas. Warming of ocean waters is expected to cause further oxygen loss in nutrient-rich coastal areas, exacerbating the situation.

As a result of these processes, ocean regions with historically very low oxygen concentrations are expanding and new regions are exhibiting low oxygen conditions. In 2011 there were around 700 reported sites worldwide affected by low oxygen conditions – up from only 45 before the 1960s. The volume of anoxic ocean waters – areas completely depleted of oxygen – has quadrupled since the 1960s. Evidence suggests that temperature increases explain about 50% of oxygen loss in the upper 1000 m of the ocean. 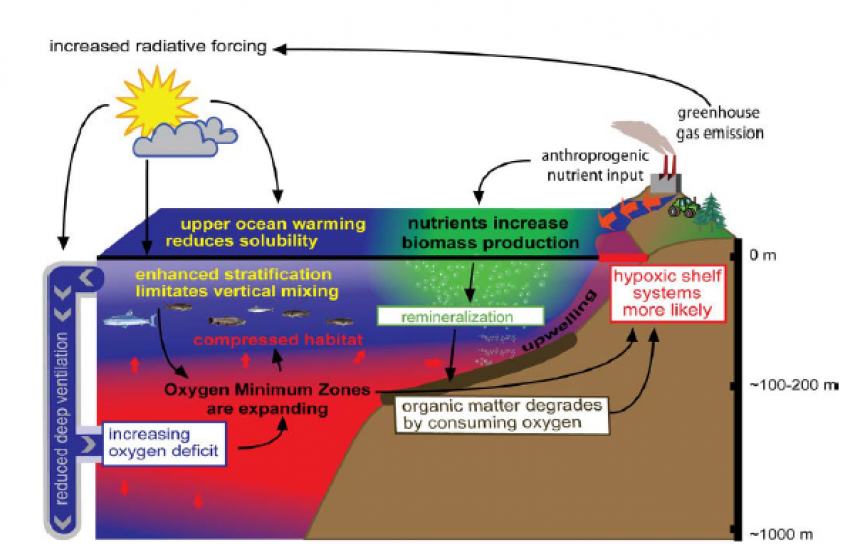 The major causes of ocean deoxygenation driven by nutrient inputs from the land and warming of the open ocean, and how they interact.

The largest oxygen loss is observed at a depth of between 100–300 m in the Tropical and North Pacific Ocean, the Southern and Artic Ocean and the South Atlantic Ocean.

Ocean oxygen loss driven by excessive organic matter and growth of algae and the threats it poses to ecosystem services are documented in many regions but likely under-reported in others. Oxygen loss driven by ocean warming, on the other hand, was only recognised more recently and is not as fully understood. The two causes can also interact – warming-induced oxygen loss is tipping coastal areas into hypoxia and may contribute to the dramatic increase in reports of coastal hypoxia.

Deoxygenation is one of multiple human-induced stress factors affecting marine ecosystems. Because respiration consumes oxygen and releases carbon dioxide, ocean deoxygenation is often accompanied by ocean acidification, making it necessary to mitigate these stressors together. Similarly, a warming ocean decreases oxygen supply but increases oxygen requirements of marine organisms, making it critical to understand the combined effects of these stressors. 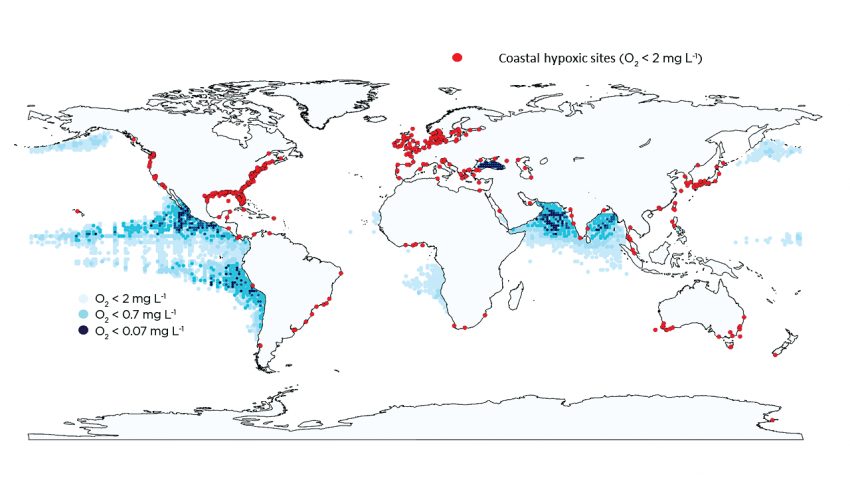 Global distribution of deoxygenation in the coastal and global ocean. In the coastal area, more than 500 sites have been inventoried with low oxygen conditions, while in the open ocean the extent of low oxygen waters amounts to several millions km³.

The ocean represents 97% of the physical habitable space on the planet and is central to sustaining life on Earth. Loss of oxygen from the ocean will have severe impacts on marine biodiversity and the functioning of ocean ecosystems. Much remains unknown as to the long-term human health, social and economic consequences of ocean oxygen loss.

Virtually all the ocean’s food provisioning ecosystem services for humans require oxygen to support organism growth and production. Oxygen is necessary to sustain the life of all the fishes and invertebrates, and deoxygenation is already causing measurable declines of fish species. Some of the ocean’s most productive biomes, supporting one fifth of the world’s wild marine fish harvest, are formed by ocean currents that bring nutrient-rich but oxygen-poor water to coasts that line the eastern edges of the world’s ocean basins. As naturally oxygen-poor systems, these areas are particularly vulnerable to ocean deoxygenation, and such effects may ripple out and affect hundreds of millions of people. Degraded habitats caused by climate change-driven hypoxia and increased algal blooms may lead to reduced catches for fisheries and possible collapse of regional stocks.

Ocean deoxygenation has started to alter the balance of marine life, favouring hypoxia-tolerant species (e.g. microbes, jellyfish and some squid) at the expense of hypoxia-sensitive ones (many marine species including most fish). Large species such as tuna, marlin, swordfish and sharks are especially sensitive to low ambient oxygen conditions because of their large size and are being forced into increasingly narrow surface layers of oxygen-rich waters. Changes in the distributions of fish species could have significant negative socio-economic impacts – where fish populations decrease in abundance or move away from traditional fishing grounds, fishers may struggle to adapt.

Ocean deoxygenation may also influence the movement of gases between the ocean and the atmosphere. Deoxygenated deeper ocean waters produce greenhouse gases such as nitrous oxide, carbon dioxide and methane that may reach the ocean surface and be released into the atmosphere, contributing to further warming.

What can be done ?

To reverse the loss of oxygen, people, industry and governments must urgently cut carbon dioxide emissions and reduce ocean nutrient pollution. Warming-driven deoxygenation cannot easily be reversed but it can be slowed considerably by mitigating greenhouse gas emissions. Without a reduction in greenhouse gas emissions, the ocean oxygen inventory is likely to take centuries to recover from warming projected under business-as-usual emissions scenarios. Reducing human-driven warming by cutting climate-changing emissions from fossil fuel combustion can prevent widespread ocean oxygen loss and enable oxygen levels to recover to some degree.

Nutrient run-off from agriculture and from both treated and untreated sewage effluent are major contributors to oxygen depletion in coastal waters, driving the over-enrichment of waters with nutrients. Solutions to reduce nutrient runoff can be tailored to local needs and economies. Effective nutrient reduction strategies include introducing legislation to limit runoff, setting specific targets and employing monitoring to detect problems. We also need to better protect marine ecosystems to conserve marine genetic biodiversity and to allow ocean life to recover, provided carbon dioxide emissions are cut.