Appreciation of Gren Lucas for IUCN

We are sad to announce the death of Grenville “Gren” Lucas, who served as Chair of the Survival Commission (SSC) from 1981 to 1989. Gren was a globally respected conservationist and will be especially remembered for his hugely influential leadership of the conservation of plant species. 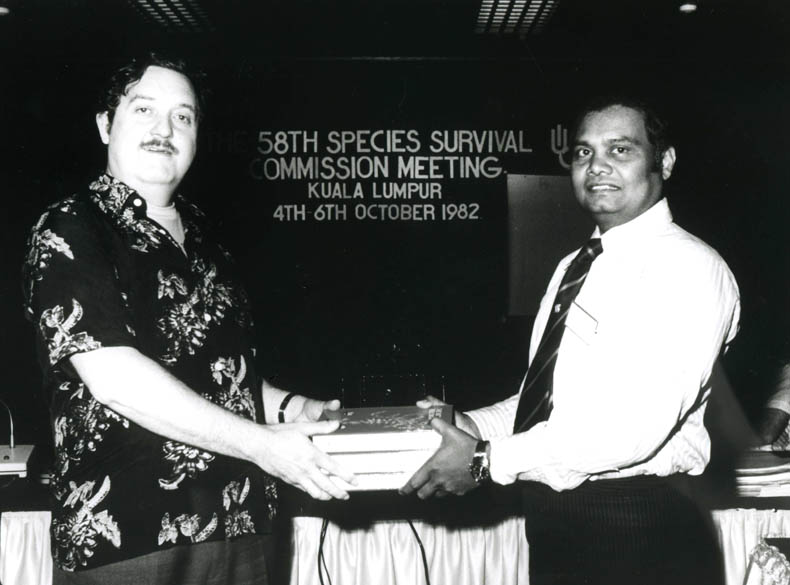 Gren was born in Cardiff, Wales in 1935 and was interested in wildflowers from childhood. He attended the University of Hull, where he developed an interest in plant taxonomy and phytogeography, graduating in 1958.  He met his future wife Shirley at university and they married in Kenya during his first overseas assignment at the East African Herbarium in Nairobi. Gren had previously worked in the herbarium of the Royal Botanic Gardens, Kew as a research student sponsored by the Colonial Office. The preparation of the multi-author Flora of Tropical East Africa continued throughout his time at Kew, whose staff he joined on returning from Africa in 1962; the project was completed in 2011. Gren’s field experience in Africa had heightened his commitment to plant conservation, and his subsequent career allowed him to play an increasingly prominent role in supporting international conservation initiatives.

In 1972, with the growth of international concern for conservation and the threat from unrestricted exploitation of wild plants in commerce, governments met to develop what became the Convention on International Trade in Endangered Species of Wild Fauna and Flora (CITES). Gren was on the UK Delegation, and one of very few botanists present. He exerted much influence on how the provisions on plants were drafted. CITES was at the heart of Gren’s conservation activities for the decades that followed, with the UK’s CITES Scientific Authority for Plants based at Kew and exerting a global influence.

In 1974, Gren was appointed as head of a new Conservation Unit at Kew, hosting the Threatened Plants Committee, under the auspices of SSC. This was to be the beginning of Gren’s long association with IUCN, in which he was honoured as Peter Scott’s chosen successor as Chairman of SSC, serving on the Council of IUCN from 1981 to 1989. During Gren’s term as SSC Chair, Specialist Groups for plants were established for the first time. Initially these covered Bulbs, Cacti and Succulents, Cycads, Ferns and Orchids, but soon rapidly expanded. In 1989, Gren retired as SSC Chair, handing over to his Deputy Chair, George Rabb.

In the 1970s and 1980s, Gren was a true pioneer of global plant conservation. Alongside his role as Keeper of the Herbarium and Deputy Director of Kew, Gren’s conservation leadership covered conservation assessment, policy and action. Kew coordinated the collection of data on plant species in danger in the wild around the world. In 1978, with the assistance of Hugh Synge, the IUCN Plant Red Data Book was published. This provided 250 examples of globally threatened plants (239 angiosperms; 6 gymnosperms and 5 pteridophytes) chosen to be representative of the 20,000–25,000 vascular plants species considered likely to be threatened at the time based on the IUCN Red Data categories. Gren worked closely with the Smithsonian Institute in Washington DC, USA where botanists were assessing native flora for the US Endangered Species Act and coordinating IUCN Red List assessments for Latin America.

Gren coordinated, inspired and mentored a growing team in the Conservation Unit at Kew, who recorded IUCN Red List assessments on a massive card index system then transferred onto a Wang database recording many thousands of threatened species globally. He encouraged us to take on big roles in the international conservation movement – recognising the huge needs and opportunities at the time. The Conservation Unit, included the Protected Areas Data Unit which together with the Threatened Plants staff, eventually moved to Cambridge to form core parts of what eventually the UNEP World Conservation Monitoring Centre.

Alongside the Red Listing work, Gren worked with other leading plant conservationists to encourage botanic gardens globally to play a part in plant conservation. Two major conferences on this theme were held at Kew in the 1970s. Calls at the second conference led to the establishment of the Botanic Gardens Conservation Co-ordinating Body in 1979. This body sent out lists of threatened plant species to botanic gardens and recorded the results of species in cultivation in the Wang database. The coordinating body became the independent organisation, Botanic Gardens Conservation International (BGCI) in 1987, with BGCI continuing to work on Red Listing and facilitating the management of ex situ collections of threatened plants.

In the early 1980s Gren also influenced the Fauna Preservation Society to embrace flora and as a result, the organisation’s name was changed to Fauna and Flora Preservation Society (subsequently Fauna & Flora International). He was widely sought as a board member, adviser and lecturer. He was a stalwart supporter of the Council for Nature, served for two terms on the board of English Nature (now Natural England), and became a Trustee of WWF-UK. In his retirement, Gren found a new focus for his energies at the Linnean Society of London, having joined as a Fellow in 1960. Elected as Treasurer in 1995, he helped to spearhead initiatives to expand its influence over government policy on systematic biology research. He supported the Linnean Society in so many ways, building for example, on his management of Kew’s entry into the digital age.

For his services to conservation, Gren was awarded an OBE in 1980, the Orde van de Gouden Ark (Order of the Golden Ark) by Prince Bernhard of the Netherlands in 1985, and the Busk Medal of the Royal Geographical Society in 1997. He received the Linnean Society’s Gold Medal in 2007 as one of its first recipients.

Gren’s big personality, commitment, drive and love for nature had a huge impact on the conservation of plant diversity. He encouraged so many of us to work hard for conservation remaining in touch and taking an interest throughout our careers. His legacy is the global network of plant experts who are members of the SSC and active in conservation; the listing of over 62,000 plant species on the IUCN Red List; the regulation of over 32,000 plants in trade through CITES; the global network of botanic gardens committed to conservation and so much more. He will be remembered with affection by the botanical community worldwide and sorely missed.